WASHINGTON — A yearly push to make the city cleaner and to make residents feel safer is underway.

“Graffiti vandalism is a drain on taxpayer dollars, can lead to decreased property values and often diminishes residents’ sense of safety.”

After announcing the start of this year’s program, workers painted over some markings that had been left on the side of a red brick building in Columbia Heights.

Shorter said crews have responded to more than 1600 service requests for graffiti during the last year in Ward 1, which Columbia Heights is a part of. 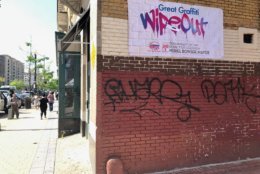 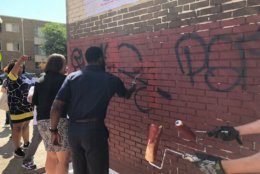 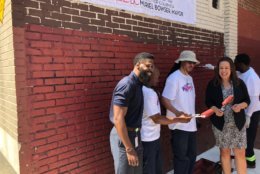 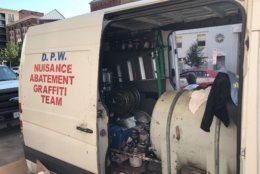 Through July 20, crews will be working their way through the city while also responding to requests from residents. Those who spot graffiti are asked to call 311.

Graffiti removal specialist Curtis Hamilton said they keep several shades of paint in their anti-graffiti van. They can also treat graffiti on bare brick by applying an acid cleaner and then power-washing the surface.

They typically cover up or remove “tags” marking territory, as well as the work of amateur artists.

The charged political climate is keeping them busy, too.

“There are a lot of people that aren’t a fan of President Donald Trump,” he said. “That’s a good percentage of our work.”

There’s also hope that the graffiti will give way to sanctioned street art. The city is asking for help identifying new walls for its MuralsDC program. After spots are nominated, they could be the site of a mural painted by a local artist.