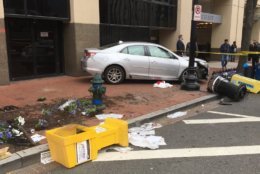 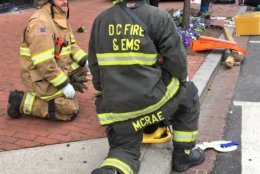 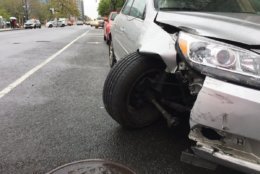 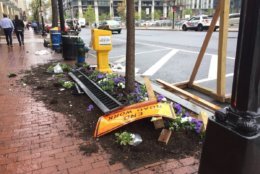 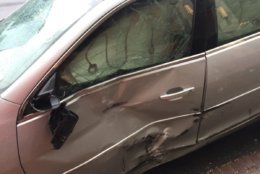 WASHINGTON — A car crash in downtown D.C. Tuesday afternoon forced one of the vehicles to jump the curb and collide with pedestrians on the sidewalk.

Around 2:30 p.m., two vehicles were driving southbound on 9th Street in Northwest D.C., when one of the vehicles took a turn too wide near the intersection with New York Avenue and crashed into another nearby vehicle. The impact pushed the second vehicle up onto the sidewalk, striking four pedestrians, said D.C. police Commander Morgan Kane.

Emergency crews transported the four adult pedestrians to area hospitals with serious, non-life-threatening injuries, Kane said. No one inside the vehicles were hurt, police said. The vehicles’ drivers stayed at the scene following the crash, Kane added.

A passenger in the vehicle that ran onto the sidewalk explained that the driver, her boyfriend, lost control of the car.

“The accident wasn’t our fault but I feel so horribly for [the pedestrians] because we couldn’t stop the car and I just saw them trying to move out of the way and they couldn’t,” said the woman, who preferred not to be identified. “This is probably the worst thing I’ve ever experienced in my life.”

Her boyfriend who was behind the wheel was taken away in handcuffs, she said, for driving with a suspended license. Police have not yet released details about arrests or pending charges.

Police said they believe the crash was merely a traffic accident, and there “was no nexus that we have uncovered to terrorism,” Kane said.

It is not yet clear how fast the vehicles were going at the time of the crash, but it’s part of the police investigation, Kane said.

The crash cleanup and police response caused roads to close for about an hour.

WTOP’s Kristi King contributed to this report from Washington.