In an effort to ensure unused prescription opioids don't fall into the wrong hands, five new opioid drop-off points have been set up throughout D.C.
(1/2) 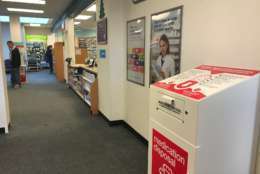 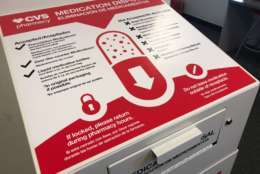 WASHINGTON — In an effort to ensure unused prescription opioids don’t fall into the wrong hands, five new opioid drop-off points have been set up throughout D.C.

The move is a step in the fight against opioid addiction, D.C. Attorney General Karl Racine said. Five locked kiosks, which look like mailboxes, allow people to get rid of drugs they no longer need.

“In an environmentally safe manner … in a legal manner … and in a way that they can’t be diverted or used by others,” Racine said Monday.

The three kiosks at CVS locations and two at Walgreens in the city will help combat what has been a constant increase in deadly overdoses, D.C. Police Chief Peter Newsham said.

Drop off locations in the city include: