WASHINGTON — The day after a D.C. jury cleared six protesters of all charges related to riots that broke out on Inauguration Day, prosecutors said they will continue to pursue charges against 188 other defendants arrested in the Jan. 20 disturbance.

“This destruction impacted many who live and work in the District of Columbia, and created a danger for all who were nearby,” said the U.S. attorney’s office for the District of Columbia in a statement after Thursday’s verdict. “The criminal justice process ensures that every defendant is judged based on his or her personal conduct and intent.”

What remains to be seen is whether prosecutors will seek additional plea deals to hold the defendants responsible after the jury rejected prosecutors’ arguments in the first of several dozen trials for those arrested during sporadic rioting on the day President Donald Trump took the oath of office.

In the monthlong trial of defendants Michelle Macchio, Jennifer Armento, Oliver Harris, Britne Lawson, Christina Simmons and Alexei Wood, prosecutors acknowledged they had no evidence any had personally used hammers, crowbars, or bricks in causing the damage and injury to police officers.

In the just-finished trial, before D.C. Superior Court Judge Lynn Leibovitz, prosecutors Jennifer Kerkhoff and Rizwan Quereshi had told jurors that by wearing black, covering their faces and cheering on those who broke windows, the defendants were aiding and abetting an orchestrated riot.

Shortly after the verdict, the six acquitted defendants, their lawyers and the ACLU D.C. called on prosecutors to drop charges against the remaining 188 people awaiting trial, saying the mass arrests and prosecutions were criminalizing dissent.

However, cases may be stronger against defendants depicted in video throwing and wielding objects used to cause an estimated $100,000 worth of property damage at Starbucks, McDonald’s, Bank of America and other buildings near Franklin Square.

To date, 20 people have pleaded guilty to misdemeanor rioting, were ordered to pay fines, and were placed on probation.

One defendant, Dane Powell, admitted breaking windows at two businesses and throwing a brick at police during the riot. He was sentenced to four months in prison

On Friday, Bill Miller, a spokesman for the U.S. attorney’s office, declined to elaborate on future prosecutions beyond the Thursday statement.

The next trial is set for March. More than 20 trials have been set, with defendants in groups of five or six. Judge Leibovitz will preside. 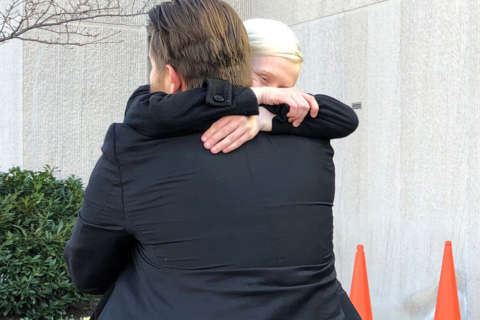