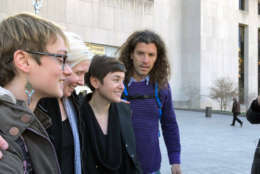 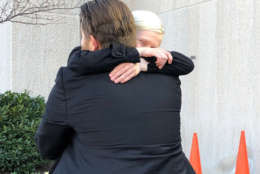 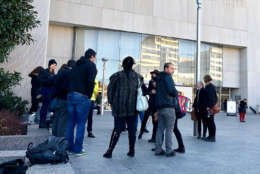 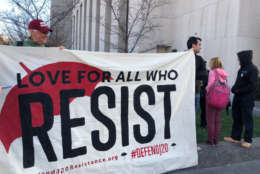 WASHINGTON — Six protesters cleared of all charges related to riots that broke out on Inauguration Day were jubilant and declared a victory for lawful dissent after a jury found them not guilty Thursday following a monthlong trial.

“People won’t be afraid to show up and go protest and get in the streets and not be worried that they’ll get mass arrested like we did,” said Michelle Macchio, one of the six acquitted defendants. “This sets a really strong precedent that that’s not OK and you can’t criminalize dissent.”

Defendants described their reaction in the courtroom as relief, followed by hugging and sobbing.

“This isn’t just about the six of us. This is about the other 188 people that are left to go. … All we can do is hope that these acquittals really set the stage for them to also get acquittals,” Macchio said.

Next year, the remaining 188 protesters will go on trial in groups of five or six.

Each of the defendants — Macchio, Jennifer Armento, Oliver Harris, Brittne Lawson, Christina Simmons and Alexei Wood — faced the same set of seven charges: two misdemeanor counts of engaging in rioting, and conspiracy to riot, as well as five felony destruction of property counts.

Leibovitz concluded that “no reasonable juror” could find that the prosecution proved the six defendants encouraged others to riot.

Prosecutors acknowledged that they had no evidence that the six defendants wielded hammers or crowbars, or threw bricks at police officers, but said that they were knowingly participating in a planned riot on Jan. 20, 2017.

Defense attorneys had argued their clients should not be held responsible for the actions of others, and called the prosecution politically-motivated, and an attack on First Amendment rights to free speech and association.

“The government’s charges are ridiculous. They really are an attempt to criminalize dissent in this country,” Armento said. “We’re not going to buy it. The jury didn’t buy it. The American people didn’t buy it and they need to drop those charges.”

Prosecutors suggested in a statement that they intended to proceed to trial, saying they hoped juries would provide the same “rigorous review” for each pending defendant as was done in this case. The next trial is set to begin in March.

“The destruction impacted many who live and work in the District of Columbia and created a danger for all who were nearby.”

Windows were shattered, newspaper boxes and a limo set on fire and items hurled during the melee, which began before President Donald Trump was sworn into office, and continued throughout the afternoon. More than 200 people were arrested that day.

The ACLU has filed a lawsuit against D.C. police on behalf of four demonstrators accusing police of an “unlawful mass roundup,” pepper spraying nonviolent protesters and holding detainees for hours without food or water or access to bathrooms.

“We hope today’s verdict begins the important work of teaching police and prosecutors to respect the line between lawbreaking and constitutionally protected protest. We hope that the U.S. Attorney’s Office gets the message and moves quickly to drop all remaining charges against peaceful demonstrators,” Scott Michelman, senior staff Attorney for the ACLU of D.C. said. 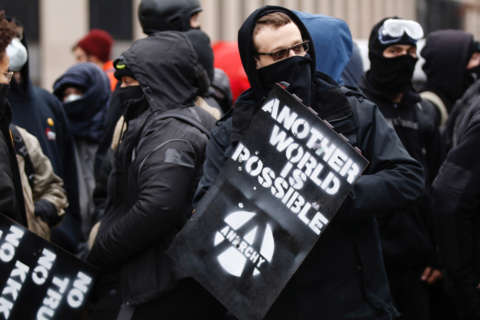 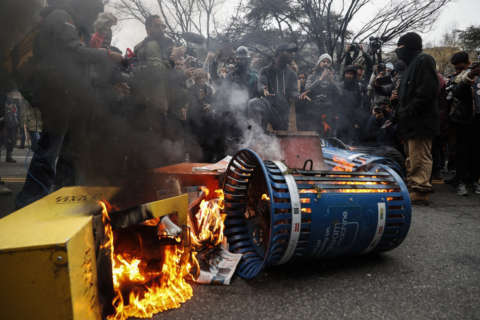