Tian Tian's keepers noticed changes that are normal for an older bear, but suspicions were confirmed after veterinarians checked in on the panda for a preventive health exam. See video.
Listen now to WTOP News WTOP.com | Alexa | Google Home | WTOP App | 103.5 FM

Tian Tian’s keepers noticed changes that are normal for an older bear, but suspicions were confirmed after veterinarians checked on the panda during a preventive health exam on Tuesday, according to a news release from the zoo.

The biggest change that’s been noticed is weight loss over the past several months. Twenty-year-old Tian Tian now weighs 260 pounds, but his weight has been holding steady for the last month.

Veterinarians were able to take a close look at the panda while he was under anesthesia. As per the exam, they took a blood sample, urine sample and X-rays. They also gave Tian Tian complementary treatments, such as acupuncture and laser treatment, to improve muscle tone and the suspected arthritis in his left shoulder.

After the exam, Tian Tian returned to the Giant Panda Habitat at the zoo to recover. He slipped back into normal routine eating bamboo and produce by midafternoon.

The National Zoo says it’s not known how long giant pandas live in the wild, but Hsing Hsing, another giant panda, died at 28 in 1999.

Those interested in Tian Tian’s recovery and progress can visit him at the National Zoo’s Giant Panda Habitat. He also makes appearances on the zoo’s panda cams. 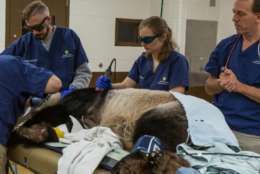 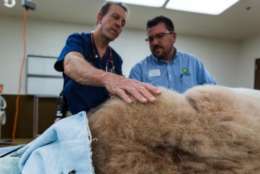 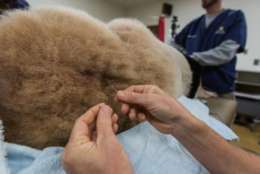 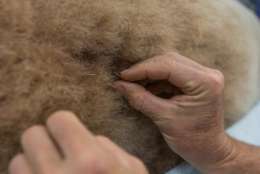