Patrons flock to Cantina Marina as bar sets to close

The beloved dock bar in Southwest D.C. is closing Saturday, as Phase II of The Wharf development expands. The bar will return to the waterfront, but not for at least a couple of years. See pictures and a video of the farewell, and find out what the owners have planned in the meantime.
Listen now to WTOP News WTOP.com | Alexa | Google Home | WTOP App | 103.5 FM

WASHINGTON — The Cantina Marina, which has enjoyed 15 seasons as an outdoor dock bar in Southwest, is closing while Phase II of The Wharf development expands along the Southwest waterfront.

“They’ve got to knock down this pier and build us a new pier,” said Cantina Marina managing partner Richard Hemmer said. “Nobody else is out over the water like we are.”

Hemmer said some of the bar’s signature items — such as the wood, the pirate and the mermaids — are being put in storage to decorate the new space when it reopens, probably in late 2020 or early 2021.

“It’s about the same space; it’s in about the same location; it’s about a floor higher so that’s good for our views,” Hemmer said. “We’ll get an empty box that we get to decorate and hopefully make feel like this place.”

There will be similar indoor and outdoor space on a second-floor level in the new location, as plans stand now.

During the hiatus, a smaller version, to be named the Cantina Bambina, will open as an outdoor bar by the transit pier at The Wharf Phase I. Hemmer said it will serve what’s essentially concession-stand food with a walk-up window. He expects it might open next month.

“Because that’s when you want to open an outdoor bar, is in November, right?” Hemmer said sarcastically with a smile.

Many employees are staying with the Cantina Marina group by transitioning to either the Cantina Bambina or the Pearl Street Warehouse, which the Cantina owners just opened at The Wharf Phase I.

On Friday, some regular patrons stopped by the bar for a fond farewell. 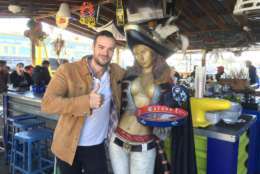 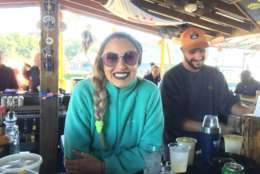 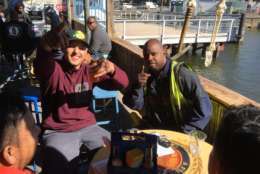 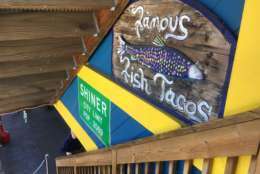 Callie Le Renard was dressed in pirate garb, ordering a pile of nachos eight inches high to say goodbye to what used to be her neighborhood bar.

Cantina Marina will close for good on Saturday night — at 11 p.m. or when the beer runs out, whichever comes first.