Witnesses said the crash happened when a white pickup attempted to maneuver around a Metrobus on 18th Street near Columbia Road. The driver has been arrested and charged.
Listen now to WTOP News WTOP.com | Alexa | Google Home | WTOP App | 103.5 FM
(1/9) 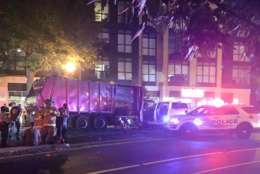 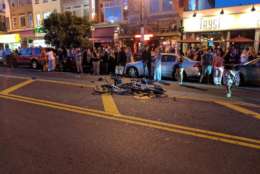 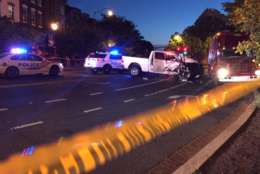 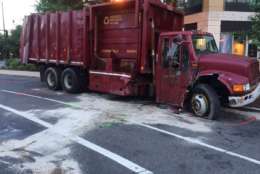 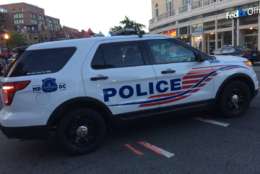 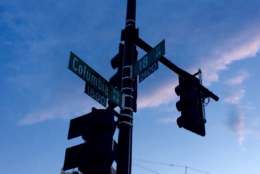 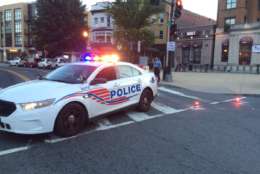 Editor’s note: As of June 10, Metro police have decided not to charge the passenger, Dwayne Taylor of Prince George, Virginia.

WASHINGTON — Two D.C. police bike patrol officers and a D.C. government worker are in the hospital after a crash Thursday night in Adams Morgan.

Around 9 p.m., a pickup truck traveling at “a high rate of speed” struck the officers and the District Department of Transportation worker, D.C. police Chief Peter Newsham said.

The crash happened along 18th Street near Columbia Road Northwest.

Bryan Weaver, who  lives in the Adams Morgan neighborhood, said he first heard squealing tires from outside his apartment.

“Right as we looked out the window, we saw a white pickup truck smash into a dump truck right in front of our building,” said Weaver. “It hit the garbage truck with such force that it moved the garbage truck… He was probably going something like 50 miles an hour, coming through the intersection of 18th and Columbia.”

All three were taken to the hospital. One officer is in critical condition but stable, Newsham said. The second officer has been upgraded to fair, while the government worker’s injuries are believed to be not life-threatening.

Newsham said the pickup also continued through the intersection and hit an unoccupied vehicle past Columbia Road.

Two suspects from the pickup have been arrested. A weapon was recovered from the suspects’ vehicle, Newsham said, but police do not have a motive at this time and are still investigating.

“We do not have any information to suggest this was a terrorist event,” Newsham said at a news conference Friday.

He went on to applaud responders at the scene for acting so quickly as well as hospital staff.

“There were some people that I want to thank who, I believe, if they did not act as quickly as they did, we may have lost one of our officers last night.”

A GoFundMe page was established for both wounded officers to raise money. Visit it here.

Brandon Figures-Mormon, 22, of Disputanta, Virginia, has been charged with intent to kill and possession of an unregistered firearm/unlawful possession of a firearm or destructive device.

Editor’s note: An earlier version of this story said that a public works employee was injured, according to police. Police now say that worker was from the District Department of Transportation.

WTOP’s Nick Iannelli and William Vitka contributed to this report. 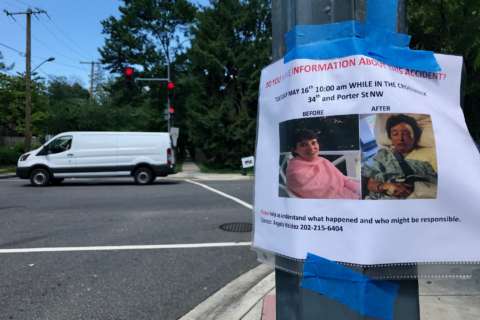 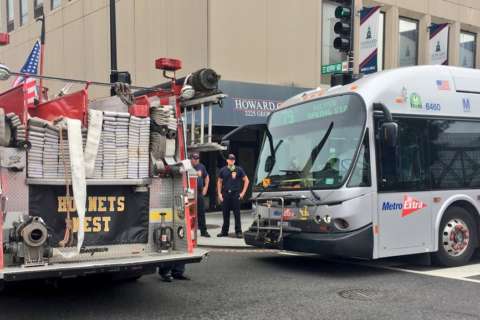 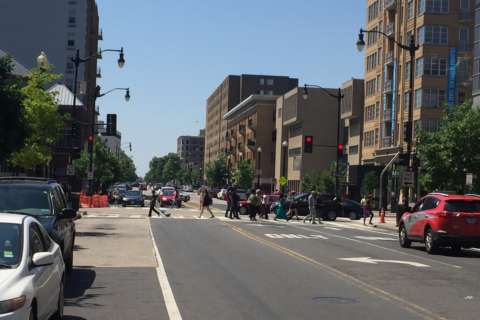