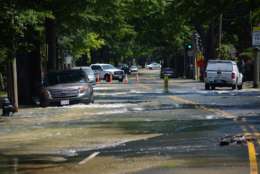 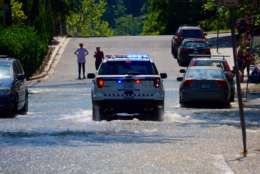 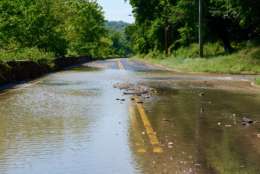 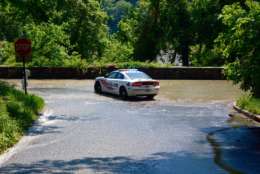 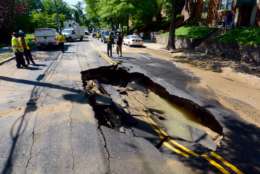 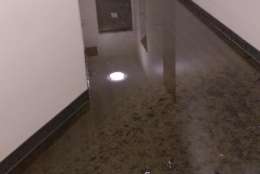 WASHINGTON — Roads in the Palisades neighborhood of Northwest D.C. were blocked and residents were trying to bail themselves out after a water main broke Wednesday on MacArthur Boulevard.

MacArthur Boulevard remained blocked in both directions between Reservoir and Foxhall roads due to the water main repairs Thursday morning.

D.C. Water says it does not know how long the the repairs are expected to take. Drivers should expect delays.

The break occurred near Q Street at about noon Wednesday.

Canal Road had been closed to traffic between Arizona Avenue and Foxhall Road because of water and debris that fell downhill; it reopened at about 4:10 p.m. Wednesday.

Some sections of asphalt on Clark Place and Q Street have been heaved by the force of the water running downhill from the boulevard. Many residents have several inches of standing water in their basements, and several feet in their garages.

John Lisle, of D.C. Water, said the broken, cast iron pipe was believed to be 30 inches in diameter and over 150 years old. The pipe may have been installed before the Civil War.

Lisle said some customers were without water, though he characterized the number as “relatively few.” The break has been found and the water turned off, but the repairs are underway — and then the road must be fixed.

WTOP’s Dave Dildine and Colleen Kelleher contributed to this report.