American University is responding to a second hate crime on campus this week after learning of online threats made against the student body president.
Listen now to WTOP News WTOP.com | Alexa | Google Home | WTOP App | 103.5 FM

WASHINGTON — Online threats made against the president of American University’s student body have prompted school police to provide the campus leader and her family with extra security.

The Anti-Defamation League discovered the online threats against Taylor Dumpson, who leads  the student government, and alerted the university Thursday night, the school said in an email to the AU community.

The threats were posted by an individual the university described as a “white supremacist,” who asked others to troll Dumpson, the first black woman to hold the post, and come in the wake of hateful messages left on campus earlier this week.

“AU immediately provided Taylor (Dumpson) with a range of supports, including assessing and enhancing her personal security,” said Vice President of Communications Terry Flannery while she co-hosted a Facebook Live event.

The event was meant to offer security tips and to inform the campus community about the threat.

Police were sent to Dumpson’s home to provide her and her family with protection, the university said in a statement.

Dumpson has been outspoken in the press and on campus in denouncing Monday’s discovery of bananas hanging from string nooses around campus –  now being investigated as a hate crime. It was also her first full day in her leadership role.

“While AU works with (the Metropolitan Police Department) and FBI on the investigation on the incidents that happened on Monday, we are also trying to do things in our community that help us think about what more can we do,” Flannery said.

In the statement, the school said it is working closely with Dumpson and her family and will not tolerate threats.

Ahead of next week’s commencement, the university is employing additional D.C. police officers to ensure the ceremonies run safely and smoothly, said Doug Pierce, assistant director of physical security and police technology, during the online broadcast. 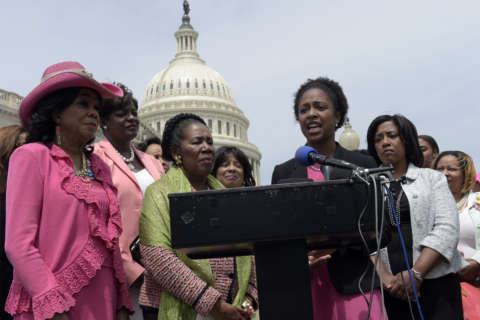 Black members of Congress demand probe of nooses at AU