Police at American University released video of an individual they believe hung bananas on strings in the shape of a noose on campus this week and they are offering a $1,000 award for information about the "racist" displays on campus.
Listen now to WTOP News WTOP.com | Alexa | Google Home | WTOP App | 103.5 FM
(1/3) 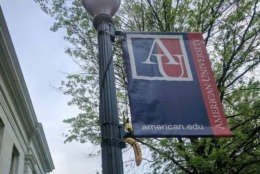 WASHINGTON — Police at American University are asking for the public’s help in locating those responsible for a “racially motivated hate crime” targeting a sorority on campus, and have release videos of the person they believe is responsible.

Police are offering a $1,000 reward for information that helps to identify a suspect in the incident.

On Monday, three displays were found on campus that included bananas hanging from strings in the shape of nooses, according to police.

In a memo to the college community, Fanta Aw, American’s vice president of campus life, said some of the fruit had the letters AKA written on them — which Aw said stood for Alpha Kappa Alpha, a sorority whose members are predominantly African-American.

The displays were set up sometime between 3:45 a.m. and 4:10 a.m. on Monday, and the suspect was wearing a black long sleeved shirt, black pants and a hat or mask, according to police.

Police say that the suspect traveled from the area of the quad at AU to the southside shuttle stop before entering what may have been a white/silver sedan near Rockwood Pathway.

Anyone with information regarding the identity of the suspect is encouraged to contact the American University Police Department at 202-885-2527 or submit an anonymous online tip here.