WASHINGTON — A 20-year-old woman was expected to appear in court Thursday after a chaotic incident near the U.S. Capitol building that prompted police to fire shots at a car during the Wednesday morning rush hour.

Taleah Everett was arrested following the incident and was charged with numerous counts, accused of trying to speed away during a traffic stop in Southwest D.C. She was expected to make her first appearance in federal court Thursday afternoon.

According to the U.S. Capitol Police, Everett was driving erratically on Independence Avenue and made a U-turn in an effort to evade police officers who were attempting to pull her over. She crashed into a cruiser and nearly struck officers, police say.

The incident, which happened before 9:30 a.m. near the Rayburn House Office Building and the U.S. Botanic Garden, sparked a heavy police response. Part of Independence Avenue was closed until about 12:15 p.m. but the Capitol complex remained open.

In an interview with NBC4, one of Everett’s relatives said the woman is mentally ill and did not get the help she needed. Everett’s aunt, Bonnie Everett, said she suffers from depression and psychotic behavior.

Bonnie recently filed a petition at a courthouse in Prince George’s County, Maryland, for an emergency health evaluation, but a judge denied the request, NBC4 reports.

“We know that she needs help,” said Bonnie. “Unfortunately the judge didn’t see that, and this is the result of her not getting the care that we know she desperately needed.”

During the pursuit and subsequent arrest of Everett, “shots were fired,” U.S. Capitol Police spokeswoman Eva Malecki told reporters at a news conference Wednesday. She declined to say how many shots were fired but said no one was injured.

Everett, of no fixed address, was charged with seven counts of assault on a police officer and two counts of destruction of property, as well as single counts of fleeing, leaving after colliding and driving without a valid permit.

In 2013, the Capitol Police fatally shot a woman who was driving erratically toward the Capitol building. Miriam Carey, 34, was shot and killed after crashing into a barrier outside the White House and leading police on a chase to the Capitol grounds. 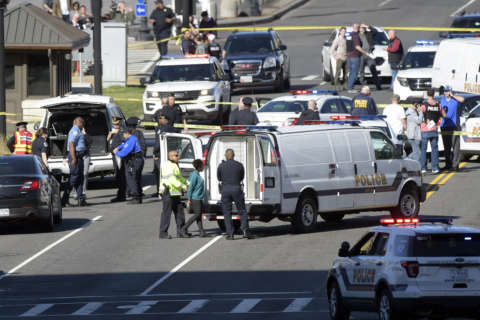