The instant popularity of the Hirshhorn's latest exhibit, Infinity Mirrors, has made securing passes harder than getting into some of D.C.'s top restaurants.
Listen now to WTOP News WTOP.com | Alexa | Google Home | WTOP App | 103.5 FM

WASHINGTON — The instant popularity of the Hirshhorn’s latest exhibit, Infinity Mirrors, has made securing passes harder than getting into some of D.C.’s top restaurants. This week’s batch of free tickets were gobbled up online in under a minute. 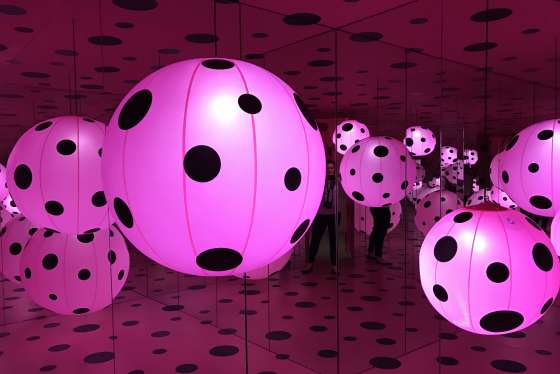 Giant pumpkins, floating polka dotted orbs and tentacles are growing inside the Hirshhorn Collection as it debuts the latest exhibit by world renowned artist Yayoi Kusama.

The demand to see 87-year-old artist Yayoi Kusama’s work is more than the museum can keep up with. Anticipating higher than average interest, Allison Peck with the Hirshhorn said for the first time, it set up an online redemption system for the free passes to keep visiting groups small and evenly scattered throughout the week.

It’s hard to say whether managing the tickets’ release garnered even more interest for the photogenic exhibit famed for its mirrored rooms featuring speckled tentacles, glowing polka-dotted pumpkins and flickering lanterns. But the museum had a higher than average 8,000 visitors in the five days since the exhibit’s opening, Peck said.

“Our main goal is to continue to offer as many free timed passes as possible. We’re planning on implementing extended hours to meet demand,” Peck said in an email.

Some would-be visitors were so intrigued by the exhibit’s interactive installations that they took advantage of the museum’s limited entry-level Kusama Circle annual membership for $50, which included free passes. Even those are temporarily unavailable as membership is at capacity, Peck said.

In the meantime, eager museum-goers can line up early outside the Hirshhorn for limited day-of passes, released each day at 10 a.m. Coffee will be sold in a warming area for those who want to enjoy the recent springlike temperatures.

Otherwise, would-be visitors will have to out-click the competition online next Monday on the museum’s ticket portal.