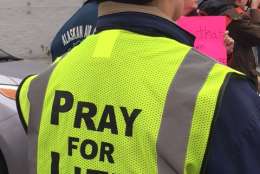 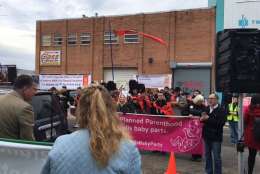 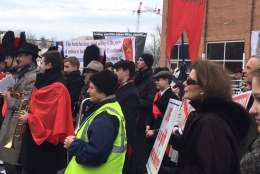 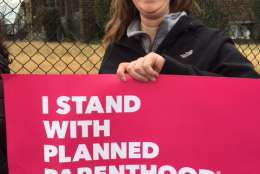 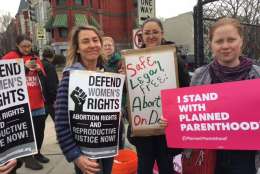 WASHINGTON — Anti-abortion demonstrators rallied Saturday in Northeast D.C. as part of a coordinated nationwide effort to support the defunding of Planned Parenthood.

(This sign refers to an anti-abortion group’s video that accused the organization of profiting off of aborted fetuses. Planned Parenthood denies the claim.)

Among the speakers at the event was the Rev. Patrick Mahoney, a Presbyterian minister for Church On the Hill in D.C. He urged the crowd to pray for Congress to pass legislation to defund the group.

“This is a national message,” he told WTOP. “For the first time in history, we have a House, a Senate and a president who would sign legislation to designate those funds to go to clinics that don’t do abortion.

“Certainly the election of Donald Trump has moved this forward. So now there is a very real possibility in the next two months that this legislation could go through,” Mahoney said.

The federal government is not allowed to use taxpayer funds for abortion except in cases of rape, incest or to save a mother’s life. But opponents say that any funds supporting other Planned Parenthood activities end up supporting abortions.

Across the street from Saturday’s D.C. rally, a smaller group held a counterprotest, with signs reading “Defend women’s rights” and “I stand with Planned Parenthood.”

“We have an entire administration that is fundamentally hostile to women rights and to reproductive rights in general,” said protester Michele Bollinger, “and I take these people at their word that they are going to attack women’s rights in any way they can.”

“Our communities need to be organized and vigilant in defense of this principals, and what exists right now,” she said. “Ideally, we would see an expansion of abortion access, not whittling away at what’s left.”

Rally organizers said more than 200 such events were held across the nation in support and anticipation of a vote by House Republicans next week.