Suspect shoots at police during chase that prompts Capitol lockdown

A suspect fired a “mini machine gun” at police during a chase through D.C. that caused a lockdown at the U.S. Capitol Tuesday afternoon.
Listen now to WTOP News WTOP.com | Alexa | Google Home | WTOP App | 103.5 FM

WASHINGTON — A suspect fired a “mini machine gun” at police during a chase through D.C. that caused a lockdown at the U.S. Capitol Tuesday afternoon.

Around 4 p.m., D.C. police say they received a call about a man with a gun in the Navy Yard neighborhood. When police arrived, they saw three suspects in a silver four-door sedan and gave chase.

The vehicle led police on a chase to the Third Street Tunnel, where one suspect leaned out of the vehicle with a “mini machine gun” and opened fire on the pursuing officers, D.C. Police Chief Cathy Lanier said during a news conference.

During the exchange, the suspect dropped the gun, later identified as a MAC-11, and some ammunition in the tunnel, Lanier said.

A short time later, the vehicle lost control and struck a wall near the exit to the tunnel at 1st and D streets in Northwest. The crash site is about a half-mile from the Capitol grounds.

No one was injured in the incident, Lanier said.

Police took three suspects into custody: two at the scene and a third, who ran off, in a courtyard in the 300 block of P Street in Southwest. On Wednesday morning, they identified them and the charges against them:

The Tuesday-afternoon shooting marked the second time in one day that D.C. police officers were the target of gunshots. One person was responsible for a shootout with D.C. police at the corner of Alabama Avenue and 6th Street in Southeast after a robbery early Tuesday. No one was injured and the gunman was taken into custody.

Neither incident was a targeted attack on police, the department said.

“There’s no way to tell people what it feels like to have people shoot at you, so there’s no perspective,” Lanier said.

“Obviously it’s a concern that somebody would turn a gun and shoot at a police officer twice in one day — it’s a big concern for us,” she added.

During the Capitol lockdown, which was in place for about a half-hour, both the House and Senate were in session, with House members voting. In the Senate, lawmakers were delivering speeches from the floor.

Below is a map with the location near where the car was stopped:

WTOP’s news partners at NBC Washington contributed to this report. 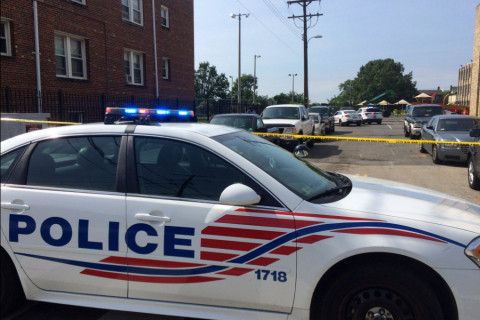