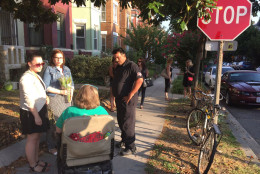 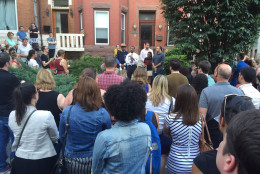 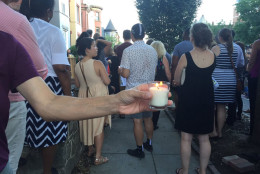 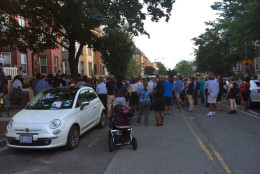 As police work to find out who did it and why, friends gathered at a candlelight vigil Wednesday night to remember 27-year-old Seth Rich.

“It’s a very surreal, shocking moment right now for me because I lost a very good friend. Somebody who was not only passionate to politics, but if you needed help with anything he was always there to help you,” Robert Alonso told WTOP.

He wants people to know that Rich, who was Voter Expansion Data Director for the DNC, believed in “a greater good.”

“I know he worked specifically with voter rights and voter expansion data, trying to help people — disenfranchised people — to be able to get to the polls and vote,” Alonso said.

Alonso was with Rich Saturday night at Lou’s City Bar in Columbia Heights.

“We were watching the UFC fight mere hours beforehand. I think I was the last person to see him walk off before he went home,” he said.

But Rich never made it.

He was shot around 4 a.m. on Flagler Place NW, just a block or so away from his home on First Street NW. When he was found, police say he still had valuables with him.

At the vigil, friends, neighbors and community leaders lit candles, spoke about Rich and wrote notes to his family.

“Everybody should feel safe when they leave their homes and when they’re walking in their neighborhoods. And right now, residents not only in Bloomingdale but across the city are on edge when they hear these types of stories,” Ward 5 Councilmember Kenyan McDuffie told WTOP.

“This was random, and it was tragic. It’s my hope that the Metropolitan Police Department are going to identify some leads to bring the perpetrators to justice,.”

Police are offering a reward of up to $25,000 for information leading to an arrest and conviction in the case.

People here just bowed their heads for a moment of silence for Seth @WTOP pic.twitter.com/vvUBtlQ629