Metro: Cleveland Park station flooding unlike anything seen before

A flash flood sent water cascading down the stairs and escalators at the Cleveland Park Metro station — and Metro's spokesman said the transit agency has never seen anything like this before.
Listen now to WTOP News WTOP.com | Alexa | Google Home | WTOP App | 103.5 FM
(1/3) 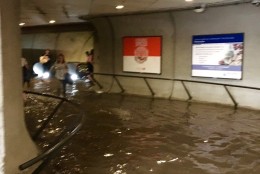 WASHINGTON — It was an interesting commute for Metro riders at the Cleveland Park station Tuesday night who were met with a waterfall down the escalator on their way home.

Though some flooding has happened at the station built in a D.C. neighborhood that sits at the bottom of hill, Metro spokesman Dan Stessel said the transit agency had never seen anything like it before.

“The entire incident was incredibly rapid. It began roughly at 6:04 p.m. and by 10 minutes later, the stairs were already drying out,” Stessel said.

The water poured over the curb on Connecticut Avenue, down the stairs and escalator at the entrance and into the mini mezzanine, as its called, above the large escalators leading to the station.

Water never made it onto the track and the incident didn’t cause any major disruptions in service on the Red Line, Stessel said. However, on social media some passengers who arrived at the station in that 10-minute span are seen wading to the stairs in calf-deep water.

Watch Metro’s time-lapse video below and another in the slider above.

“The station was closed for several hours, not because of water. The water brought in sediment. We took that time to mop it up and also the escalators needed to be inspected by technicians,” he said.

There was no damage to the escalators and the station reopened in the 9 p.m. hour, Stessel added.