The U.S. Air Force Band is celebrating its 75th anniversary by welcoming home more than 200 alumni. The band members and conductors began their music careers on different paths but eventually, they all answered the call to serve their country.
Listen now to WTOP News WTOP.com | Alexa | Google Home | WTOP App | 103.5 FM
(1/7) 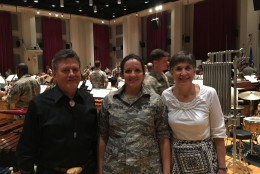 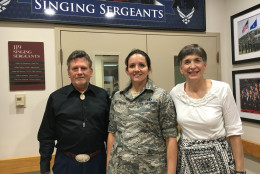 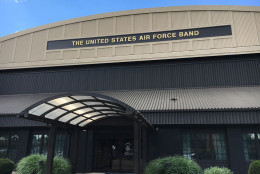 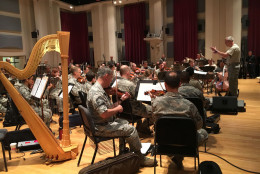 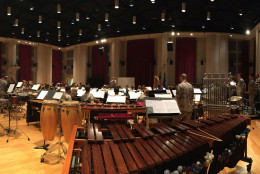 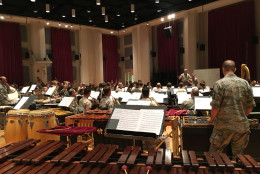 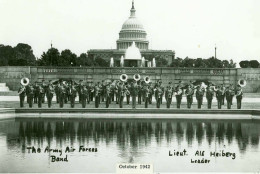 JOINT BASE ANACOSTIA-BOLLING, D.C. — The trumpeters raise their horns. The vocalists draw a breath. The flutist purses her lips.

The symphony waits for the conductor’s cue. Suddenly, an explosion of music. An emotional “Battle Hymn of the Republic” floods the air. The rehearsal has begun.

To the ear, it’s a professional orchestra. But this band is unique. To these musicians, music is not just their passion, it’s their mission.

The U.S. Air Force Band is celebrating its 75th anniversary by welcoming home more than 200 alumni. Current and former members will perform together in two free concerts on Friday night and Saturday night.

The band also performs every Tuesday, Friday and Saturday nights throughout the summer.

The band members and conductors began their music careers on different paths — as teachers, high school band directors, college professors or touring professionals. But eventually, they all answered the call to serve their country.

At Joint Base Anacostia-Bolling, Lt. Col. Don Schofield walks the halls of the newly-renovated Hangar 2, where the band rehearses.

He reflects on the photos of the United States Air Force Band’s 75-year history, proudly displayed on the walls.

“The picture that we’re looking at here, this is the Air Force band back in the early 1940s. They were all Airman Soldiers. So you can see that they had rifle training, they had gas mask training. They were preparing for war of any kind,” he said.

“They are Airmen, they just happen to serve through music,” he said.

They perform at ceremonies, public events, private state dinners, military funerals, even local schools, but they also have a diplomatic purpose especially during conflict.

Maj. David Alpar recalls a recent, tense moment between the United States and another nation.

“Things were not going well throughout the day,” he said.

The Singing Sergeants — one of the band’s six ensembles — performed a song in the foreign leader’s native language. Maj. Alpar says the man stood up, joined with them and was brought to tears.

“And for the next two hours, even though the dinner was supposed to be over, negotiations continued,” Maj. Alpar said.

“When the Airmen of Note — the jazz band — was performing at the White House and the Japanese Ambassador went to the American Ambassador and he said, ‘If the band is this good, how good are your pilots?’ ” Lt. Col. Schofield said.

Col. Larry Lang, commander and conductor of the band, is responsible for the 184-member squadron, which performs nearly 1,600 missions every year all around the world.

“There was a base at Manas in Kyrgyzstan. I remember playing at an orphanage and the kids had never seen an American group before. It was just so heartening to see them smile and enjoy being with us. It brought a little hope to them because it was a very poor country,” he said.

They even travel to American service-members on the front lines.

“We had a chance to go out to the remote regions of Iraq,” he said. “It felt dangerous. I remember hearing gunfire and bombs going off at a couple of different places. But that was the reality of it.”

He says the greatest honor is performing for veterans, especially the World War II Honor Flights right in Washington, D.C.

“They did so much to protect our freedoms. They gave so much of themselves. And even if they are in wheelchairs, they often bounce right up and start dancing. It’s amazing,” he said.

The alumni concerts will be a family affair for MSgt. Emily Wellington, an alto vocalist and violinist.

“Both of my parents were in the band,” she said.

That’s where she met her future husband, a trumpet player.

“Actually it was my very first tour that I went on in the Air Force Band,” she said, laughing. “We were on the same bus.”

“The things that stick out in my mind the most is when friends of mine didn’t make it back from Vietnam. When I’m standing at Joint Base Andrews or at the Arlington National Cemetery and I’m thinking, ‘That could have been me.’ But my horn kind of saved my life. I played for people who didn’t,” he said.

“Every time taps is played, it affects me emotionally. I was glad to have served and be a part of that.”

They also have a son who is an Air Force Band conductor currently stationed in Europe — two generations of military service through music.

“I still picture standing on the stage, on the risers, looking out into the audience and seeing the color guard come down the aisles. And all the people standing up,” Lewis said.

“It almost always brought tears to my eyes when I saw how the American people responded to that American flag and to the music that we performed to promote that feeling of love of our country.”