Participants in the DMV Cornhole Fest battled it out with beanbags Saturday in Southeast D.C. for the chance to win championships and cash prizes.
(1/5) 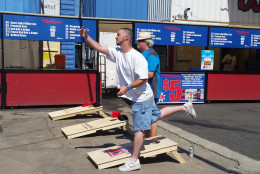 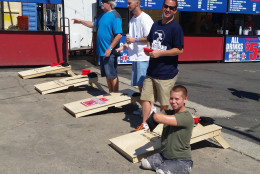 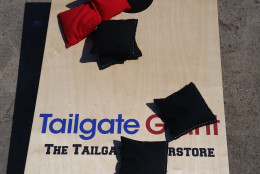 WASHINGTON — Seventeen-year-old Dayton Webber of Waldorf, Maryland, looked a little sheepish as his fellow cornhole fans raved about his skills.

“I’m all right,” he said, amid laughter. But the dirt bike and hunting fan has no arms or legs, and people at the DMV Cornhole Fest on Saturday think he is awesome. But Webber doesn’t think tossing a beanbag into a hole in a wooden board is that big of a deal.

“It’s not that hard,” Webber said.

But cornhole is a bigger deal than one might think. Organizer John Mikulec said Saturday’s events in Southeast D.C. included the American Cornhole League’s state championships for Maryland and Virginia as well as the Best of the DMV Championships. The league holds championships in 20 of the 50 states.

“There’s money on the line,” Mikulec said. “It’s popular around the country, and it’s really blowing up.”

Here is how the game works: You toss your beanbag at the board on the ground. If you hit wood, you get one point. If you get it in the hole, you get three points. You play to 21.

“I’ve played horseshoes and other kinds of sports but not the cornhole,” Marsey said. “I like getting it in the hole.”

Kim Tucker of Waldorf, Maryland, had big plans for the day: “Drinking beer and having fun and enjoying the competition.”

Saturday’s lucky winners get a chance to head to the Championships of Bags 2016 in July at Harrah’s Cherokee Casino in North Carolina. Participants will compete for $50,000 in prizes.