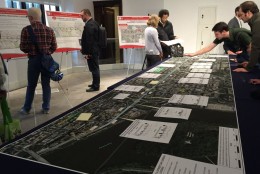 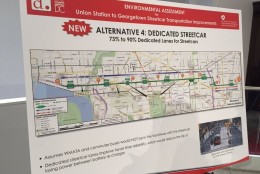 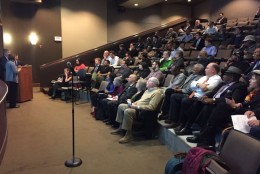 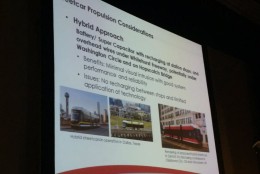 WASHINGTON — The District is considering extending its new streetcar line about  3 1/2 miles from Union Station to Georgetown, and planners are looking at two ways to make it happen.

Under one plan, streetcars would use dedicated lanes for up to half the trip, and would share lanes with other vehicles for the rest.

“Shared being similar to what we have on H Street, where the streetcar and vehicles share the same lane. Dedicated being more similar to what you might see in Toronto, where you have lanes that are exclusive for streetcar operations,” said DDOT project manager Jamie Henson.

A second option, just added, would use dedicated lanes for up to 90 percent of the route. A third option that was once under consideration has now been dropped.

“We were thinking about implementing streetcar in the service lanes of K Street. We thought it would be less expensive and easier to do it that way. Turns out it’s more expensive, and not nearly as easy,” Henson explained.

“It will improve run times; it will improve reliability. [But] when there’s a benefit, there’s often a cost. And so the cost is most likely to be borne by auto traffic … and that’s still to be studied.”

But Henson says DDOT is hoping to improve the way everyone gets through the K Street corridor.

“We’re really trying to figure out how we can really rethink K Street so that it can be a street that really is highly functional, but also a street that we’re really proud of. I mean, K Street is Main Street.”

For the extension to Georgetown, planners are also looking at various ways to power the trains.

They include an on-wire system like what’s already in use along the H Street/Benning Road line, an off-wire system, and a hybrid of the two.

Tuesday night, there was a big turnout for a public meeting about these proposals at the Carnegie Library.

Many residents who spoke said they were excited about the plans. Some had concerns about things such as cost, which DDOT did not discuss.

Henson said it’s too early to estimate when construction may begin.

The next public meeting on the proposals is planned for fall, possibly in October.