The District does not have an office of rail safety, and a bill that would change that is now in D.C. Council's Committee on the Judiciary.
Listen now to WTOP News WTOP.com | Alexa | Google Home | WTOP App | 103.5 FM
(1/3) 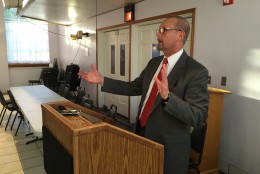 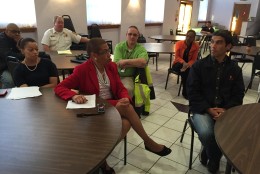 WASHINGTON — Efforts to improve safety are underway in the wake of the CSX freight train derailment near D.C.’s Rhode Island Avenue Metro station just over two weeks ago.

At a Monday night meeting about the derailment hosted by several Advisory Neighborhood Commissioners, Rob Doolittle with CSX said the investigation into what went wrong isn’t finished yet.

“We do not have a declared cause for the incident at this point,” said Doolittle.

He wants to reassure residents that a spill of about 750 gallons of sodium hydroxide — also known as lye — from an overturned train car was completely cleaned up.

“We excavated all the soil that was impacted by the sodium hydroxide. We took about 15 truckloads of dirt — about 150 tons of soil — away from the derailment site and backfilled that with clean fill dirt and gravel,” Doolittle said.

Chemical spills are something D.C. Delegate Eleanor Holmes Norton has been very concerned about.

“I work very hard on hazmat, to keep hazmat materials from going through the District of Columbia at all,” she said.

The District does not have an office of rail safety, and a bill that would change that is now in D.C. Council’s Committee on the Judiciary.

“We’re trying to work through some of the questions around what agency within the District of Columbia would be the right place for that office to be established,” said Councilmember Kenyan McDuffie, who chairs the committee.

Herbert Harris, with the Brotherhood of Locomotive Engineers and Trainmen, said his group has been pushing for the creation of such an office for about four years now. He thinks the effort has gained momentum in the wake of this month’s derailment.

“The District leadership understands the need now to have technical and real expertise in-house that could monitor the operations of both the passenger and freight rail activity coming through the District of Columbia. We would then be on par with Maryland and Virginia so we could then look at a coordinated regional effort effectively monitoring rail traffic to protect the public and the residents of each jurisdiction,” he said.