Testing continues to determine exactly what kind of oil it is, and it's also still not known yet who's responsible for allowing the oil to get into the water.
(1/3) 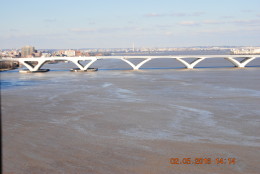 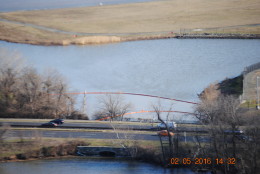 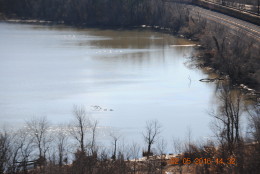 WASHINGTON — There are still a lot of questions about the mysterious oily goop that recently turned up in the Potomac River, but some questions have been answered.

U.S. Coast Guard flights over the river Friday have determined that the oil spotted from north of Reagan National Airport to the Wilson Bridge, entered the water in the area of Gravelly Point and the Roaches Run Waterfowl Sanctuary, areas right off the George Washington Parkway.

Testing continues to determine exactly what kind of oil it is, and it’s also still not known yet who’s responsible for allowing the oil to get into the water.

Julia Robey Christian with D.C.’s Department of Energy and Environment told WTOP that the spill doesn’t seem to be spreading, so containment booms put in the water at Gravelly Point Thursday morning appear to be working.

She said beyond those floating barriers, the concentration of oil in the water appears to have gone down significantly.

She said what once looked like a rainbow-colored oil slick now looks like silvery wisps in the water.

Robey Christian said the oil will likely dissipate over the next few days.

Unfortunately, at least 18 birds have been found covered with oil.

On Friday, efforts were underway to capture and treat those birds.

If you see see animals affected by the oil in D.C., you’re asked to call 311 to report them.

A command center set up in the DOEE offices to handle the spill, will continue to operate on Saturday.