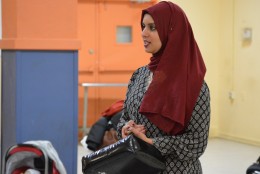 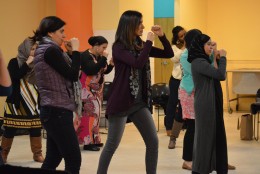 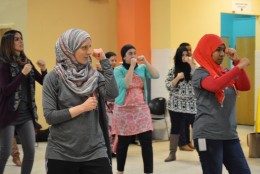 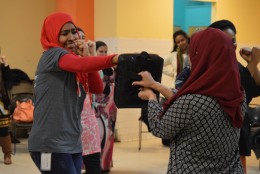 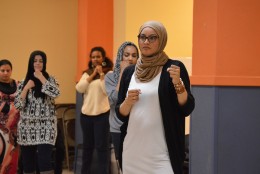 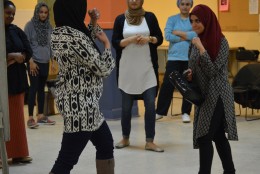 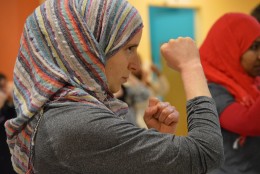 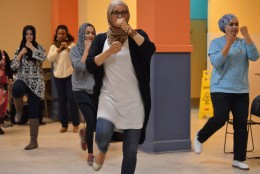 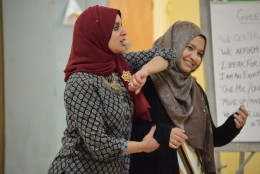 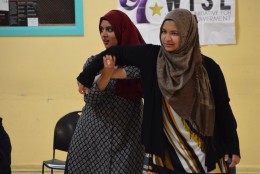 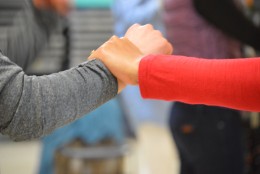 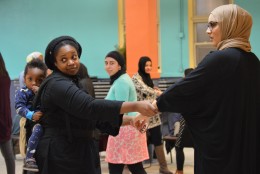 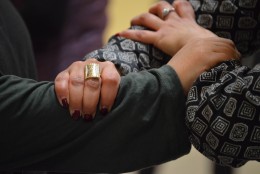 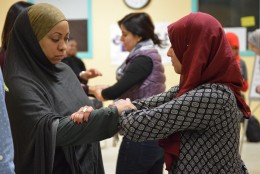 WASHINGTON — Rana Abdelhamid was 16 years old when a man attacked her and attempted to remove her headscarf as she was walking on a New York City street six years ago. The incident left her feeling vulnerable and alone, she told a group of local Muslim women at a self-defense workshop Friday night.

A group of 20 local women gathered, some with babies in tow, in the basement of the St. Stephen and Incarnation Episcopal Church, in Northwest D.C., to learn self-defense and discuss what it’s like to be a Muslim woman in America today.

“It feels that there’s a unique way that Muslim women are being targeted. I think it has to do with the intersection of patriarchy and anti-Muslim hatred and bigotry,” says Darakshan Raja, a D.C. resident and founder of the Muslim American Women’s Policy Forum, an organization aimed at working against state- and gender-based violence.

Raja, program manager at the Washington Peace Center, teamed up with Abdelhamid, a black belt in shotokan karate and founder of the Women’s Initiative for Self-Empowerment — an organization which provides young Muslim and Jewish women with training in self-defense, social entrepreneurship and leadership — for WISE’s fourth self-defense workshop in D.C. in the past month.

“I thought it was a good opportunity to bring together Muslim women in an offline space, in person, engaging these issues and trying to figure out how to heal from these horrible experiences,” says Abdelhamid, 22, a master’s student of public policy at Harvard University’s John F. Kennedy School of Government.

Abdelhamid kept reading on her social media newsfeed about how other Muslim women felt afraid. She says Muslim women are vulnerable, especially those who don the hijab — headscarf, burqa or niqab.

According to FBI records, 16.3 percent of hate crimes reported in the U.S. in 2014 were anti-Islamic in nature. But since the Paris attacks, the rate of suspected hate crimes against Muslims has tripled, The New York Times reports.

For Abdelhamid, self-defense is one way to empower women because, she says, it gives them agency over their bodies.

She starts every self-defense class with an overview of the different pressure points to attack — the eyes, nose, chin, solar plexus, neck, biceps, ears, kneecaps, behind the knees, the groin area and toes.

She says attacking a pressure point is the best thing to do in a dangerous situation because it will cause a lot of pain and, therefore, allow for more time to get away, which is the ultimate goal.

Abdelhamid also teaches techniques including a punch, a triangle maneuver to get out of an arm grab, a front kick and a knee jab — the latter two useful for attacking the groin area.

“With everything I hear on the news and the Islamophobic issues, it really made me concerned, and I wanted to be aware of how to defend myself in case of any emergency,” says Elzubair, who moved to the U.S. from Dubai about a year ago.

She says she enjoyed the discussion portion of the event.

“It was so touching,” she says. “It opened my eyes that I’m not alone in this.”

Hind Essayegh, 33, a mother from Silver Spring, Maryland, says the discussion was equally important and empowering because, like Elzubair, it made her feel like she wasn’t alone.

“I want to strengthen myself by any means possible to be able to defend myself and my family,” Essayegh says.

Abdelhamid says she could sense a lot of the anxiety the women felt through the discussion they had.

“It’s disheartening to hear how almost every single woman in that space felt insecure, felt she had to be way more careful walking out of her home, doing mundane day-to-day tasks like going shopping for groceries, or taking a bus,” Abdelhamid says.

Safety of the hijab

The fear Abdelhamid points to has some Muslim women questioning whether it’s safe to wear their headscarves. Some have suggested wearing a hoodie or beanie on top of the hijab to attract less attention.

Imam Suhaib Webb, a D.C.-based religious leader, says there are temporary occurrences, called nawazil, which can cause Muslims to not be able to do something for a moment, such as wearing the hijab.

“It’s up to the woman to make her call in her own life. No one knows her life like she does,” says Webb, the founder of City Sundays, a D.C. faith-based monthly gathering aimed at creating cross-cultural relationships between people from different backgrounds across the D.C. area.

“When we start to give up our constitutional rights, we are inviting the Islamophobes to silence Islam and Muslims,” he says.

Abdelhamid has worn her hijab for seven years, since she was 15.

“I don’t feel the need to take it off. In fact, what’s happening makes me want to embrace my faith and embrace my practice even more strongly,” she says.

Even so, Abdelhamid encourages other Muslim women to do what they feel is best. “Everyone deals with this type of violence in different ways. Not everyone is going to deal with it in the way that I am,” she says.

Like Abdelhamid, Webb says self-defense is important and should be a community obligation. He says his own daughter is trained in taekwondo.

“I think it’s highly commendable for women to protect themselves as well as the Muslim community,” he says.

WISE’s next three self-defense workshops will be held in Massachusetts, Texas and New York throughout January, Abdelhamid says.