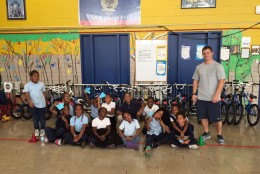 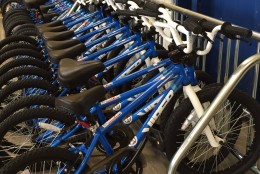 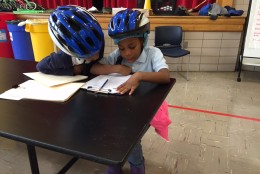 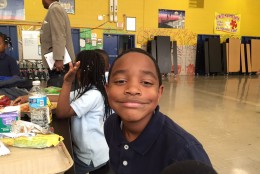 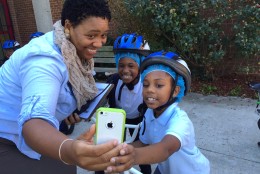 WASHINGTON– The bikes arrived in the District of Columbia Public School’s warehouse in August. By mid-October, the first group of second graders with access to the 600 bikes were ready to roll; they’d been given the basics of biking, taught about safety, and now, would go on a ride of up to six miles in their neighborhoods.

For the kids at CW Harris Elementary School in Southeast D.C., the weather for their October ride couldn’t have been better: sunny and warm. As they were ushered into the gymnasium where they’d been training, practicing bike handling, braking and turns, they excitedly sat down to be outfitted with helmets. They chattered about the ABC’s of biking—the first check before every ride: Air, Brakes, Chain.

Mike Richards, the Health and Physical Education teacher at CW Harris, made sure each child was paired with a chaperone. The kids were excited to roll out the door, and Mr. Richards was asked if he was nervous. “Yeah!” he said, without hesitation. “This is my first time doing anything like this. I’m anxious, I’m nervous.” But, he said, he was confident in the volunteers who were serving as chaperones and in the path he’d mapped out for his students.

Principal Heather Hairston also admitted to some nerves. “I’m fighting the temptation to get in my car and follow them” she said, laughing. “But I trust our teachers and I trust our people and we’ve got  a lot of support. And if they need anything, we’ll be right there.”

As they headed out the door, they walked their bikes. Once outside, the groups hopped on their rides and took off. Some zipped right along, others wobbled, but everyone completed the ride. Seven year old Jazzmen Tate was not a fan of the segment of the ride that took the kids into the woods, but she did like one part– “Going downhill!” Seven year old Hassan Walker agreed about the downhill part. The kids did have some challenging uphills too. “It was kind of like a roller coaster,” Walker said.

Eight year old Sikeyia Gladden said she had fun on the ride. “It was great!” she said with a smile. For those who had trouble with the uphills, seven-year-old ArMari Kelly offered some advice. “Do what I do, just stand up and go up the hill”. She was referring to her strategy of attacking hills by standing up on the pedals and pumping as hard as she could. It worked, volunteer chaperone Jeff Miller said, he was blown away by her determination.

DCPS started the cycling program this year as part of the Cornerstones Program. Principal Hairston said the kids were honing gross and fine motor skills, developing cooperative learning, and building a supportive community. An example of that cooperation and support is provided by ArMari, who offered the following to nervous novice cyclists: “Ride side-by-side with me so you won’t be scared.”

Richards, who declared the ride a success when his class returned to school for lunch, said that along with the learning skills the students were gaining, they were also exercising. “If they can have fun riding a bicycle, they’re having fun exercising. And as health and phys-ed teachers, that’s what we want our students to take away from our class.”