Local kids get in on the John Oliver, D.C. statehood fun (audio)

WASHINGTON – Local kids and their parents gathered on the lawn in front of east side of the U.S. Capitol Building to sing-along with John Oliver’s Washington D.C. statehood song in support of the District’s movement.

“When the John Oliver video came out, we saw that was like ‘This is it! This is the way that connects to people that normally don’t feel they can be part of this,’” supporter Tim Krepp told WTOP.

And so advocates decided that having children sing the song in front of the U.S. Capitol Building was the best way to continue spreading the message of D.C. statehood.

“Children are the perfect platform because it is the problem that is going to continue and perpetuate with them,” supporter Maria Carey said.

But perhaps the person happiest to see John Oliver’s segment on HBO’s ‘Last Week Tonight’ was Congressional Delegate Eleanor Holmes Norton.  She has personally seen the benefit of exposure on comedy news programs from her appearances on the Colbert Report.

“People would stop by my office from Timbuktu saying, ‘Could we get a picture with you?! We saw you on Colbert!’” the delegate said.

Supporters say that it is unfair for District residents to have no say in Congress while paying a high amount in taxes. Sen. Tom Carper (D-Del.) reintroduced a bill in late June to make D.C. the nation’s 51st state. 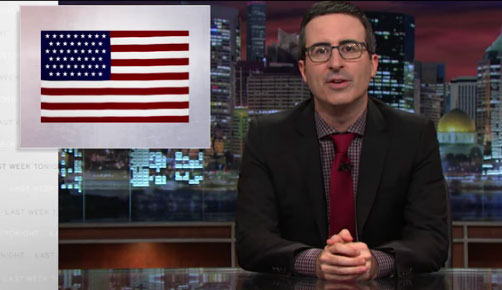