Moving into a holiday weekend, there’s not much in the way of work zones planned. We’ll check out new intersection improvement change taking place on Friday and take a deeper dive into the new summer Platform Improvement Project starting this weekend on Metro.

Here’s what you need to know before heading out the door this Memorial Day Weekend.

The Virginia Department of Transportation (VDOT) has a rolling closure planned for Friday on Rolling Road in Springfield. This is all part of a bigger intersection improvement event for Rolling Road and Old Keene Mill Road. Crews will be implementing of a new traffic shift as part of a widening project.

This Friday, beginning around noon, at least one southbound lane will remain open as crews work on the new permanent traffic shift. The traffic on southbound Rolling Road between Old Keene Mill Road and Kenwood Avenue will be shifted to the right onto new pavement. This shift will allow for reconstruction of the median area.

The intersection improvements are scheduled to be completed later this year.

This year will be void of the annual Rolling Thunder Ride, an event where hundreds of thousands of motorcycles converged on the nation’s capital from all directions to honor the country’s POW/MIAs. This annual ride could see traffic held at various locations to facilitate the event.

This year’s replacement event will be courtesy of American Veterans, also known as AMVETS. There will be a Rolling to Remember Ride through the District this Sunday.

The ride, which calls for furthered efforts to recover American POW/MIAs and bring awareness to veteran suicide, will round the border of the District by way of Interstate 395 in route to the National Mall.

This event will host an estimated 50,000 motorcycles at RFK Stadium’s lot 8, where they will disperse around noon to ride through the District, circling the National Mall.

This Memorial Day Weekend is generally all about the Eastern Shore, when to leave, lane configuration at the Bay Bridge, traffic on US-50.

There is rain in the forecast this weekend, which will dictate travel patterns on US-50 crossing the Chesapeake Bay Bridge.

Be sure to stay tuned to WTOP for traffic and weather on the 8s (and when it breaks) with the latest, and be sure to call the Traffic Center with any road hazards or tips to be part of the process at 866-304-WTOP.

The Maryland Transportation Authority (MDTA) has tips for travelers using US-50 at the Bay Bridge this weekend. Heavier traffic volumes should be expected Thursday through Saturday with more volume building again later Sunday through Monday. They do urge motorists to stay on US-50 on BOTH sides of the bridge to keep the local roadways open for first responders and residents.

There off-peak scheduled suggestions for traveling to and from the Eastern Shore this holiday looks like this:

With the Blue Line platform project officially in the books, the Arlington Cemetery (Blue Line) and Addison Road (Blue and Silver) stations are now open just in time for Memorial Day weekend. Metro will now set sights on the Green and Yellow line platforms.

This weekend, Metro begins the next phase of its Platform Improvement Project on the Green and Yellow lines, which will close four stations the West Hyattsville, Prince George’s Plaza, College Park-U of Maryland and Greenbelt stations for improvements through Sept. 6. During this time, free shuttle buses will be provided for customers to and from the closed stations. Check out the shuttle schedules and alternative travel options, parking and bus relocations online. 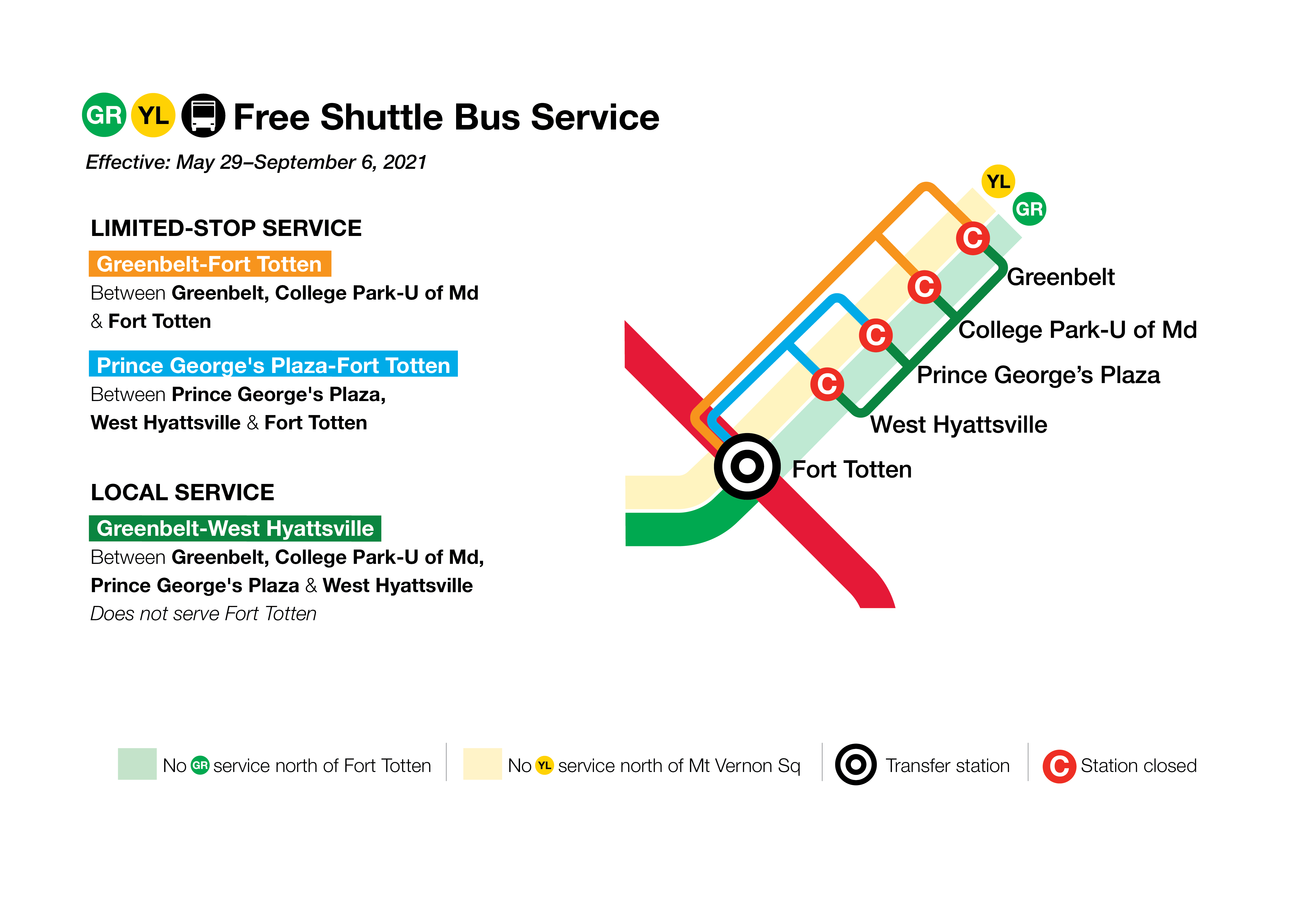