Drivers trying to cross the Bay Bridge in Maryland were met with hours-long delays as long-lasting police activity shut down the westbound lanes of the bridge.

The Maryland Transportation Authority warned drivers to avoid the Chesapeake Bay Bridge because of ongoing police activity involving a person on the bridge. The complicated response took place more than 200 feet above the water.

Around 7 p.m., they said that all lanes had reopened and thanked first responders for their efforts to bring the situation to a safe end.

BAY BRIDGE UPDATE! All lanes have reopened on WB bridge. We thank our motorists and surrounding community for their patience as 1st responders and MDTA Police safely resolved incident. #MDShorebound #mdtraffic

WTOP Traffic Reporter Dave Dildine said that while lanes had reopened, the backup would take some time to clear because of its size.

Get the latest from the WTOP Traffic Center.

Dildine said while the back-up was extreme, it eventually leveled off at around 13.5 miles in length.

The eastbound backup with a day-long discontinuation of two-way traffic was about 8 miles long. Shore-bound drivers were faced with the prospect of less capacity than usual for a summer Friday afternoon in the absence of contraflow.

Although the physical length of the backup wasn’t as bad as some summer Sundays with crashes on the bridge, the magnitude of the delay tipped the scales. The 20-hour long bottleneck on the limited access highway with no bypasses nearby built up a significant amount of pressure.

WTOP’s Dave Dildine and Zeke Hartner contributed to this report.

Weekend road and rail: Lanes and ramp closures for I-295 / DC-295 and stops for both Suitland Parkway and I-66 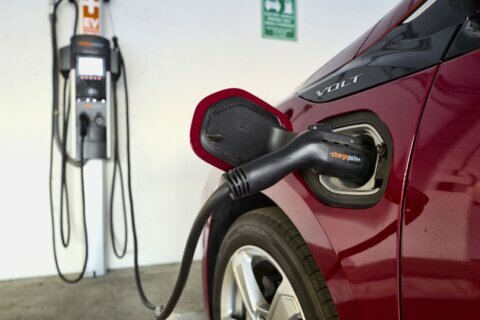 Report: DC area would be a prime beneficiary of switching to electric vehicles