Here's a look at some of the largest road and rail projects that could impact your weekend travel plans in the D.C. region.
Listen now to WTOP News WTOP.com | Alexa | Google Home | WTOP App | 103.5 FM

New work is beginning on US-29 in Howard County, and Maryland State Highway reports the Interstate 495 Beltway Outer Loop work is now expected to continue into August.

In Virginia, VDOT is planning overnight stops on I-66.

In the District, paving has begun around Connecticut Avenue and Chevy Chase Circle, and the I-295 southbound ramp to Howard Road is closing permanently. On Metro, the Green and Yellow line extended shutdown closures are now from U Street to Fort Totten.

Here’s a look at some of the largest road and rail projects that could impact your weekend travel plans in the D.C. region.

In Howard County, a new roadway resurfacing project began Thursday night, July 9, along US 29 / Columbia Pike at the bridge over the Patuxent River.

Every night, starting at 9 p.m. and running through noon on Sunday, July 12, crews will be blocking the right side of the highway beginning just south of Old Columbia Road and running over the Patuxent River bridge to the Howard / Montgomery County line.

Motorists can expect closures to continue into next weekend as crews are also expected to shift to the left side.

In the week ahead, in Montgomery County, the emergency repairs will continue to close lanes on I-495 Capital Beltway’s Outer Loop between Md. 650 New Hampshire Avenue and Md. 193 University Boulevard.

Motorists can expect the intermittent closures of single to multiple lanes weekdays between 9 a.m. and 3 p.m. and overnights from 9 p.m. to 5 a.m. to continue through late August.

The State Highway Administration (MDOT SHA) scheduled this emergency work zone to repair a damaged bridge joint over the Northwest Branch bridge, which crosses over the Anacostia.

Commuters may recall when the damage was first noticed during an early morning commute, it was discovered that the bridge joint had become exposed, causing damage to vehicles. This prompted response for emergency repair, with the initial completion projection now being extended.

In Frederick, the total weekend closure of Md. 28 / Dickerson Road over the Monocacy River continues for bridge rehabilitation. On Friday at 10 p.m., closures and detours will be posted with flagging operations in place all other times through September.

The continued rehabilitation of Baltimore’s I-895 Harbor Tunnel and Thruway has a change set to continue into September, with two-way traffic operating in the northbound tube weekdays.

The southbound tube of the tunnel will be continuously closed weekdays beginning Sundays at 10 p.m. though Fridays at 5 a.m. until Sept. 3. This schedule will not impact daytime or weekend travel.

With weather permitting, the weekday southbound tube closures are set to start this Sunday, July 12, at 10 p.m.

In Arlington, lane closures with full stoppages are planned for I-66 eastbound beginning Friday night.

With the Bon Air Bridge set for construction, the travel lanes of I-66 eastbound will be split for the next three months as part of the I-66 Widening Project.

Beginning at 8 p.m. on Friday night, the two eastbound lanes of I-66 near the Patrick Henry Drive overpass will be split for approximately a half mile for bridge deck work to progress in the center section of the current bridge over the Custis Trail at Bon Air Park.

One lane will close eastbound from about Sycamore Street to Fairfax Drive / Glebe Road (exit 71).

To implement the new proposed traffic split, all traffic will be stopped completely for up to 20 minutes at a time anywhere from midnight through 4 a.m. The eastbound lanes are expected to be reopened by 9 a.m. Saturday morning with the new split configuration, which will be in place for up to three months.

This widening project will add travel lanes along four miles of eastbound I-66 slated to open by the fall. It also includes new bridges over US-29 for the Washington & Old Dominion Trail (W&OD), as well as a new direct access ramp from eastbound I-66 to the West Falls Church Metrorail Station at Route 7 Leesburg Pike.

In Northwest, temporary lane closures have begun in and around Chevy Chase Circle, where a paving project is scheduled to continue Monday through Friday from 9:30 a.m. to 3:30 p.m. and Saturday from 7 a.m. to 5 p.m.

The work is expected to be completed by Monday, July 27, weather permitting.

During this time frame, motorists can expect delays with flaggers, and traffic control devices will be in place, as various lanes will be closed for milling and paving. Drivers are reminded to obey signs and directions and travel through with caution.

District Department of Transportation (DDOT) is permanently closing I-295 southbound ramp to Howard Road SE (exit 4) as part of the I-295/Suitland Parkway interchange reconstruction and improving I-295 / DC-295 project.

The new exit ramp route will open on or about July 10.

Pedestrian and cyclist access to Anacostia Metrorail Station remains unchanged. However, pedestrians and cyclists are advised to stay alert and follow signage when traveling through this area as well as the surrounding construction areas.

Also, there are temporary closures on the Suitland Parkway between South Capitol Street, SE/SW and Firth Sterling Avenue, SE weeknights from 8 p.m. to 5 a.m. and on Saturday from 5 a.m. to 9 p.m. for bridge reconstruction with a marked detour posted.

Yellow and Green line customers should allow additional travel time as Metro performs round-the-clock track work along segments of these lines, including closures of selected stations.

Through July 18, the Columbia Heights and Georgia Ave-Petworth stations are closed.

Buses will be replacing trains between U Street and Fort Totten (lower level) stations. There will be stops at the Columbia Heights and Georgia Ave-Petworth stations.

Yellow Line trains are operating between Huntington and U Street only, and riders should consider the Red Line as an alternate traveling between Fort Totten and Gallery Place-Chinatown.

The summer shutdown and platform rehabilitation project continues, as nine Metrorail stations on the Orange and Silver lines remain closed. With no Silver Line trains, Orange Line trains operate between Ballston-MU and New Carrollton only.

All stations west of Ballston-MU are closed, with stations between Ballston-MU and Largo Town Center being served by Orange and/or Blue Line trains.

Metrobus will operate from 5 a.m. until 11 p.m. on a modified Sunday schedule.

For your safety, all customers are required to wear face coverings when riding mass transit.

VRE riders won’t be able to use Amtrak Step-Up tickets starting Monday, July 13. Amtrak is requiring regular tickets only in an effort to have a total handle on capacity and social distancing. 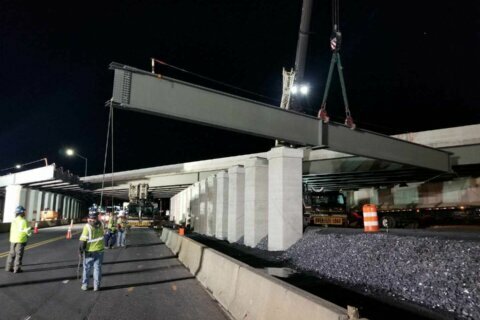