There have now been at least a dozen major truck crashes on the “Big Curve” west of Old Georgetown Road since the beginning of March.

Maryland State Police have deployed several strategies to try to address the issue.

Aggressive commercial vehicle inspections in the area were conducted on Monday and Tuesday.

Police have reached out to a popular commercial vehicle driver app, and asked them to “warn drivers in that area of the increase in crashes — the need to reduce speed,” Shipley said.

Between April 26 and May 1, troopers cited 155 drivers for going 80 or more miles an hour.

“Our efforts have been aimed at enforcement. That is what the Maryland State Police can do, and that is what we’ve been doing now for weeks,” Shipley said.

Highway volumes have dropped by more than 60% below normal during the pandemic on this part of the Capital Beltway, and Maryland State Police cited speed as a contributing factor to the majority of the wrecks.

The recent rash of truck crashes began March 15, when a tractor-trailer barreled into the concrete wall on the sky ramp, penetrating the bridge’s barrier and sending chucks of concrete onto the spur below.

About a week later, a truck driver lost control and jackknifed on the morning of March 23. The cleanup took hours to complete.

Two days later, a tractor-trailer wreck resulted in a large fuel spill and a HAZMAT response in the same location. At least one of that truck’s saddle tanks ruptured, spilling fuel on the highway.

On April 9, another tractor-trailer jackknifed around noon that day.

A few days later, on April 13, two trucks were involved in a pileup on the curve during the early morning hours. Later that day, another truck jackknifed shortly after noon as rain began to fall.

A tractor-trailer wreck on the afternoon of April 23 once again damaged a section of the concrete wall. The southbound lanes of the I-270 spur were closed for hours as the debris below the wreck was cleaned up.

Just hours after highway crews completed repairs to the barrier damaged April 23, two tractor-trailers collided on the curve around 3 a.m. on April 24. According to Maryland State Police, one of the truck drivers failed to negotiate the left curve, which caused his truck to jackknife. One of the trucks caught on fire immediately after the collision.

Back-to-back truck crashes on the afternoon of April 30 kept lanes blocked on the Outer Loop at the “Big Curve” for nearly 12 hours. The first truck jackknifed shortly after 1 p.m. The second truck crashed just minutes after the first wreck was cleared around 4 p.m.

Several other crashes involving tractor-trailers were reported nearby on that same day.

The majority of the truck wrecks on the “Big Curve,” including the two on Wednesday, have resulted in damage to the fuel tanks and subsequent fuel spills.

In addition, there have been several crashes involving trucks on the smaller curve of the Inner Loop near the I-270 spur.

The speed limit for all traffic approaching the curve on the Outer Loop is 50 mph. Maryland State Police said a number of these crashes have involved speeding, or speed too great for conditions.

Informed observers of the situation suggest poor signage and road design contribute to the “Big Curve” being prone to accidents.

WTOP has reached out to the Maryland State Highway Administration.

The Maryland Department of Transportation said it was ready to unveil some new plans aimed at making that stretch of road safer. Portable message signs urging drivers to slow down were placed on the left and right shoulders of the Outer Loop in advance of the curve several weeks ago. 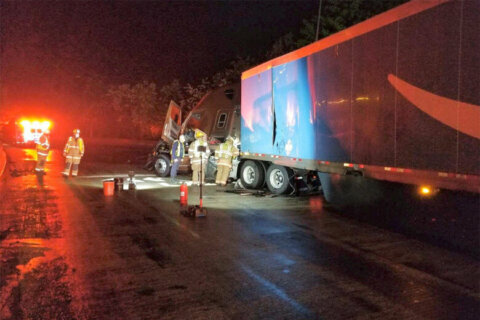 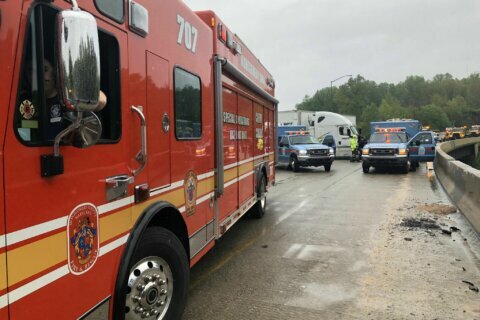 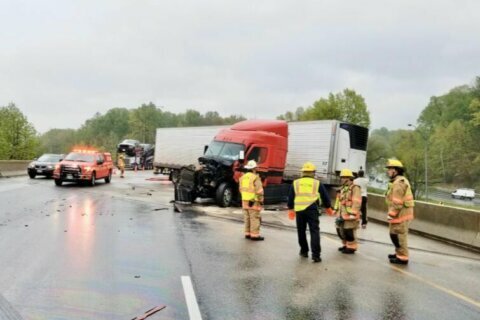 Truck carrying pineapples crashes at I-270 ramp on Outer Loop