The Sept. 27 gridlock was so severe that the suspension of toll payments was ordered for two hours that night to alleviate the traffic tie-ups.

“I apologize to the Board of Public Works, I apologize to the public that they experienced what they did last Friday,” Rahn said at the three-member board’s meeting Wednesday. “It was a miserable day for people trying to cross the bay.”

The gridlock was so severe that Rahn ordered the suspension of toll payments for two hours Friday night to alleviate the traffic tie-ups. The last time that occurred was in March 2018, as the result of severe weather.

The Bay Bridge is undergoing a $27 million maintenance project to resurface the bridge deck on the westbound span.

Maryland State Comptroller Peter Franchot, who sits on the Board of Public Works, told Rahn, “There should have been a lot more advance planning. Somebody dropped the ball, and I hope that you’ll keep us informed as to how you’re going to fix it.”

Rahn told the board, “I recognize, and I admit, that clearly what happened was not anticipated and we did not have a response already in advance planned for it.”

Rahn explained the timing of the work could not be delayed since the resurfacing project includes working with weather-sensitive materials that have to be applied when temperatures are 45 degrees and above.

“If temperatures dive on us and stay low, it’s going to limit what kind of work can be done,” he said. Starting work in September was designed to take advantage of warmer weather to complete that segment of the project.

In order to prevent similar backups, the Maryland Transportation Authority has announced that they will operate cashless tolling on the bridge, with E-ZPass users unaffected. Drivers who typically stop at tolls to pay the cash fee will be waved through by toll operators and will receive a statement in the mail so they can pay the $4 toll.

The cashless tolling will be in effect on Thursdays and Fridays, from noon to 10 p.m., for the duration of the two-year project.

Should the cashless tolling fail to relieve congestion, Rahn said the MDTA could implement two-way traffic on the westbound span at lower speeds, from 25-35 mph.

“Obviously, we need to do this maintenance because we need to have a functional Bay Bridge,” said Franchot, who added, “I hope that you are going to get it right.” 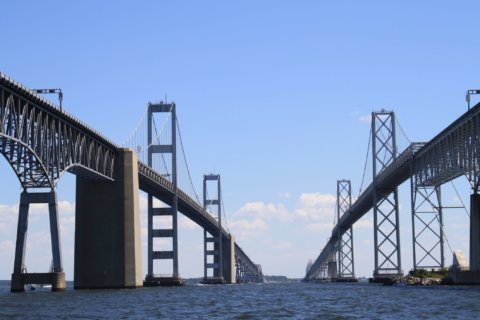