I-95 southbound lanes reopen after fatal crash near Laurel

One person has died after a crash Thursday afternoon on Interstate 95 that shut down part of the highway near Maryland Route 216 in the Laurel area.
Listen now to WTOP News WTOP.com | Alexa | Google Home | WTOP App | 103.5 FM
(1/2) 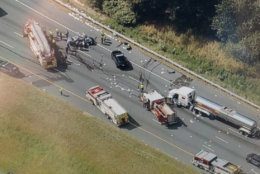 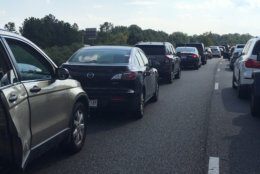 One person has died after a crash Thursday afternoon on Interstate 95 that shut down part of the highway near Maryland Route 216 in the Laurel area, police said.

It began, Howard County police said, when officers were called to the 9100 block of All Saints Road just before 2:30 p.m. for the report of drug activity in a vehicle.

“However, when the officers began to approach, the driver of the suspect vehicle suddenly accelerated and fled from the scene,” said Sherry Llewellyn, a police spokesperson.

Although police tried to stop him, the driver of that sedan proceeded onto northbound I-95 at 216. Police believe the driver then tried to make a U-turn into the southbound lanes while speeding; the driver lost control and a tractor-trailer hit the vehicle.

A third vehicle was run off the road, and that driver was also taken to a hospital with minor injuries.

RIGHT NOW: A terrible crash has I-95 in Maryland CLOSED at the exit for 216 Scaggsville Rd. Medevac just landed at the scene for transport. Use the #Baltimore Washington Parkway #breakingnews #mdtraffic @nbcwashington @wbaltv11 pic.twitter.com/AyChkjU0R2

Effects on the afternoon commute

Police closed I-95 southbound between Maryland routes 32 and 216 as police investigated. Cars that were stuck near the crash site were diverted onto northbound 95, said WTOP Traffic reporter Dave Dildine.

And while the northbound lanes are open, he said, gapers’ delays are slowing down traffic past the crash investigation.

The impact of this crash lasted into the evening and miles away — throughout Howard County, in northern Anne Arundel County and portions of upper Montgomery County. The southbound lanes reopened around 8:30 p.m.

“This is the kind of traffic incident that causes traffic disruptions far and wide and, in some cases, far removed from the incident scene,” Dildine said.