Extending Virginia’s 495 Express Lanes to the Legion Bridge will require widening the Capital Beltway, but would also bring new sidewalks or bike paths in the area between the Dulles Toll Road and the Potomac River.

The Virginia Department of Transportation will present preliminary designs for the toll lane extension Monday night. The extension is intended to connect to toll lanes Maryland plans to allow a private company to build over a rehabbed Legion Bridge.

Construction on Virginia’s extension could begin late next year and open to traffic in 2023.

Maryland has yet to formally select its toll lane designs though, which complicates the situation.

“We’re doing a standalone project that we believe can be implemented without Maryland, and we’re also making it so it could adapt to whatever rules they have in Maryland,” VDOT Megaprojects Director Susan Shaw said ahead of Monday night’s meeting at Cooper Middle School in McLean.

Among the most crucial issues, Maryland has not committed to following the same toll lane rules that allow HOV-3 and buses to ride free with an E-ZPass Flex.

“We’re trying to make it so that our improvements, whatever we do, will be compatible depending on what their decisions are,” Shaw said.

Virginia’s preliminary designs include continuing the current 495 Express Lanes about 3 miles, with two lanes each way, to the Legion Bridge.

The designs tentatively include a connection to the George Washington Parkway, but VDOT is also considering eliminating those new ramps at the request of the National Park Service.

There is no new connection planned at Georgetown Pike.

The designs are projected to require the use of private property to widen the Beltway.

“We do anticipate that we will have right of way impacts. There are no total relocations — residential or commercial — that are anticipated. It would be, you know, a portion of the property immediately adjacent to the corridor,” Shaw said.

VDOT has yet to complete noise studies that would determine if and where sound walls would be added.

“We won’t have all the answers, but we’ll have the beginning of some of the answers,” Shaw said of Monday night’s meeting.

In addition to the roadway widening, VDOT plans to add or expand sidewalks on roads along the corridor that need to be rebuilt, such as the bridges carrying Old Dominion Drive and Georgetown Pike over the Beltway.

There would also be a trail added behind any noise walls along the three-mile stretch.

The initial designs, shaped through a number of studies and reviews over the past year, are meant to address projected traffic levels in 2045. 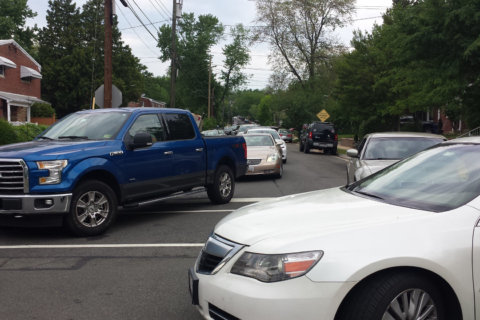 Va. considers how to spend next round of I-66 toll money