Since the 2-mile extension of the 95 Express Lanes opened, results have been mixed for rush-hour commutes on the interstate. Here's how it's impacted travel times and tolls.
Listen now to WTOP News WTOP.com | Alexa | Google Home | WTOP App | 103.5 FM

WASHINGTON — Some rush-hour commutes on Interstate 95 have been better since a 2-mile extension of the 95 Express Lanes opened to reduce backups in the regular and toll lanes at the original southern merge, but others have been slower, according to analyses by VDOT and the Express Lanes’ operator.

The one-lane extension of the reversible HOV or toll lanes opened Oct. 31, 2017, to address problems with the original design that put traffic on a flyover ramp to merge into the regular lanes just as people in the regular lanes were trying to merge right to exit onto Virginia Route 610.

“Since that extension opened, it’s helped reduce the likelihood of congestion in that southern part of the lanes, and, if there is congestion, our customers aren’t going to be sitting in that as long,” Transurban’s Mike McGurk said.

That has led to more rush-hour drivers taking longer trips in the lanes, because lower tolls and shorter backups at the merge mean fewer spikes in toll prices for the last few miles, McGurk said.

Now, 22.3 percent of evening rush trips taken between 4 p.m. and 7 p.m. in the Express Lanes go to or beyond Garrisonville, an increase from 19.3 percent before.

“When there was congestion in that area, the toll prices would react to that, and that’s when we would see actually some of the most pricey trips for that segment through the 95 Express Lanes,” McGurk said.

With the changes, fewer drivers appear to be bailing out into the regular lanes around Quantico.
A Virginia Department of Transportation analysis done at the request of the Free Lance-Star found that southbound travel time in the regular lanes from Exit 150 to Exit 143 between 5 p.m. and 6 p.m. on weekdays was about 1.5 minutes faster between Jan. 1 and Sept. 30 of this year than the same period a year earlier.

However, a more complete southbound trip in the regular lanes from Exit 150 to Exit 133 was about 30 seconds slower on average this year than at the same time last year, according to INRIX traffic data.

Northbound in the morning, the extension has significantly sped up trips in the regular lanes between 7 a.m. and 8 a.m.

The traffic data suggest one key benefit of the extension is the shift of the Express Lanes’ entrance or exit away from other ramps to make things simpler for many drivers than the original design.

A preliminary analysis of crashes in the area since the extension opened found a slight increase in southbound crashes and a decrease in northbound crashes that involved property damage of at least $1,500 or injuries.

Additional extension work is expected to kick off this spring to push the lanes 10 miles south toward Fredericksburg by 2022.

Transurban is in the final stages of selecting another private company to work with on designing and building the $595 million extension, which also includes new ramps for the lanes at Quantico. Construction is scheduled to begin in the spring to bring the HOV or toll lanes south to U.S. Route 17 (Exit 133).

The end of the lanes will directly link to a new Interstate 95 southbound bridge over the Rappahannock River that will carry through traffic next to the existing local lanes.

About a year later, VDOT expects to open a similar new $132 million northbound I-95 Rappahannock River crossing in 2023 with regular lanes added from just south of Virginia Route 3 (Exit 130) to just north of U.S. 17 (Exit 133), where the reversible Express Lanes extension will end. The regular lanes on I-95 will be widened to four lanes to Centreport Parkway (Exit 136). That project had been canceled until VDOT decided to restore it earlier this year.

Construction on that project is expected to begin in 2020.

There are no current plans to extend the toll lanes beyond Fredericksburg. 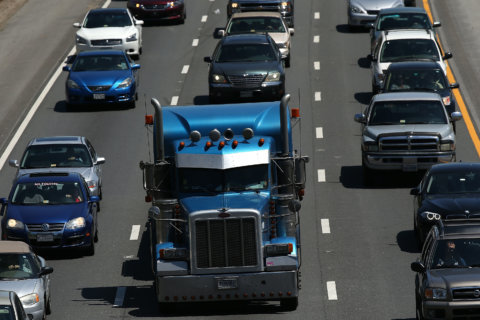