Since February, VRE riders have been paying nearly twice as much as Metro riders to park in the same spaces at Franconia-Springfield, but VRE's CEO says an agreement to end those higher charges is close.
Listen now to WTOP News WTOP.com | Alexa | Google Home | WTOP App | 103.5 FM

WASHINGTON — Since February, VRE riders have been paying nearly twice as much as Metro riders to park in the same spaces at Franconia-Springfield, but Metro and VRE are said to be close to an agreement to end those higher charges.

“I think we’re moving with them in a direction that would be able to mitigate some of those issues,” said Virginia Railway Express CEO Doug Allen in an interview.

Some VRE riders have switched to parking at Springfield Town Center and taking a shuttle bus to the station rather than paying $8.95 per day for parking. Metro riders who pay with the same SmarTrip card used to ride the system pay $4.95 on weekdays.

“So in the short term that’s what some of our riders are doing, but in the little bit longer term, we’re looking at coming up with a solution for Metro that accomplishes what they want to accomplish but without an extra charge for parking for our riders,” Allen said.

The Metro Board could discuss the issue next week.

“It hasn’t been worked out yet, but it would not include VRE covering the cost,” Allen said.

In a statement, Metro said no final decision has been made.

“We are discussing with VRE possible options that may, in the future, allow users of VRE to pay the Metro-rider rate. Any changes to our parking fees would need to be considered by the Board of Directors,” Metro spokesman Ron Holzer said.

With growing demand for reliable alternatives to sitting in traffic in the Interstate 95 or Interstate 66 corridors, VRE is in the midst of a number of projects to expand capacity on its trains. The extra capacity is expected to be even more important next summer when Metro plans to shut down the Blue and Yellow lines in Virginia for months.

“We don’t know what we’re going to be able to do, but that’s why we’re looking at how we can perhaps operate more service,” Allen said. VRE saw significant ridership bumps during previous 24/7 Metro single-tracking and shutdowns, with some riders sticking with the commuter rail service even after Metro returned to normal.

“So we would have a good opportunity to have people ride our trains, and so we’re going to be looking at how we can add capacity to our existing service and perhaps if we could operate additional service during the middle of the day or extend the peak hour service, but it’s a function of being able to work with our host railroads and whether we’d be able to do that,” Allen said.

While Virginia Railway Express operates the trains, they run on tracks owned by Norfolk Southern, CSX and Amtrak. VRE pays the railroads for track access, but also makes its own investments to improve service. The Lorton platform was just lengthened, and a number of other stations are set to get similar treatment to accommodate longer trains planned over the next few years as new railcars arrive.

In Alexandria, VRE hopes to move from design to construction in the next year or two on a tunnel under the tracks to make it safer and more accessible to reach trains pulling in on the far side. It would also make it easier to transfer between Metro and VRE or Amtrak.

At Crystal City, VRE is now reviewing public feedback on possible locations for a rebuilt and expanded station. A new station could also have a more direct connection to Reagan National Airport.

At Broad Run, VRE plans expanded parking and a bigger rail yard space and platform within the next five years. If Norfolk Southern approves, that would include new parking on the north side of the tracks connected to the station by a new tunnel. Adding parking there could also take traffic off narrow Piper Lane, Allen said. The expansion there is in place of a plan that would have extended service to Gainesville.

In Manassas Park, VRE is looking into building a parking garage.

While VRE has a mix of funding for these projects from the state, local governments and portions of Interstate 66 transit revenue, the system is hopeful for the future now that it has some dedicated annual funding through the state. That funding was included in the bill that provided separate local dedicated funding for the Metro system.

For now, VRE is just beginning to use a new storage track near L’Enfant Plaza to save money and time by no longer running an empty train back to Manassas in the middle of the day. VRE is still planning an expanded rail yard near Ivy City to hold more trains in the future when Amtrak takes back the space VRE is using now so Amtrak can store its own newly expanded fleet.

“I think we have a good solution, and we’ve been making good progress on getting the design and getting funding lined up to begin the construction as soon as that’s done,” Allen said.

Today, VRE carries about 20,000 commuters a day. With expanded parking and longer trains, the agency is confident it can reach 25,000 per day in coming years. The numbers could rise further if riders spread more evenly throughout the rush-hour service. While a few trains are regularly filled, others have a quarter or more of their seats available on average.

In the long term, once a newly expanded Long Bridge over the Potomac allows more daily trains for VRE, Amtrak and the freight railroads, Allen thinks 40,000 to 50,000 riders a day is a reasonable expectation.

The District Department of Transportation is running a study on an expanded Long Bridge. The environmental review is expected to wrap up within the next two years. 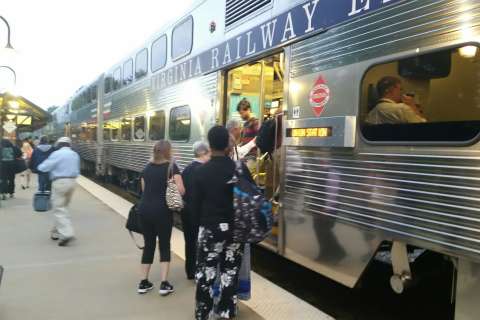