The Arlington Memorial Bridge is getting a new lease on life with an infusion of money for repairs from the federal government, Virginia, D.C. and the National Park Service.
Listen now to WTOP News WTOP.com | Alexa | Google Home | WTOP App | 103.5 FM

WASHINGTON – The Arlington Memorial Bridge is getting a new lease on life with an infusion of money for repairs from the federal government, Virginia, D.C. and the National Park Service. 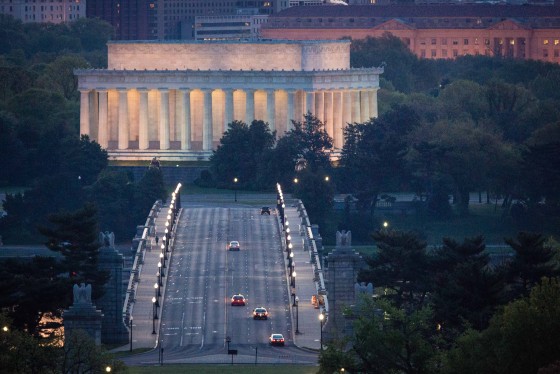 The National Park Service has selected a plan for rehabilitation of the bridge, which was built in 1932, carries about 68,000 vehicles a day and has been deteriorating significantly.

“It is incredibly exciting [that] this beautiful, significant bridge is finally going to get the attention that it needs,” said Bob Vogel, regional director of the National Capital Region of the National Park Service.

The bridge was built in 1932, was expected to have a 75-year lifespan and is now in such bad shape that officials believed closing it would have been necessary by 2020 without restorative intervention.

The new funding announced Friday means a comprehensive repair project can be planned and executed all at once, instead of being done in stages as money would have become available. Vogel said that will save $35 million in money and a year and a half in construction time.

A timeline for commuters

The bridge loses half its traffic capacity when construction begins in earnest. Vogel said that during the design period, traffic studies will be conducted to determine what mitigation and diversion plans may be needed to prevent gridlock.

About $90 million of the restoration money comes from a Federal Highway Administration grant; $30 million comes from D.C. and Virginia, and $107 million is coming from the National Park Service.

“It took everyone working together to make this happen,” Vogel said.

Some Memorial Bridge trivia from Vogel: It was designed to symbolically connect the North and South, by connecting the Lincoln Memorial to Robert E. Lee’s home, Arlington House.

With that in mind, Vogel said, the bridge is historically significant and a beautiful piece of art, as well as a critical transportation hub and a vital evacuation route for the federal city.

“So, it’s very symbolic and important to the entire nation,” he said.