Coronavirus News: Fairfax Co. votes to increase substitute teacher pay | Is it time to get a COVID-19 booster? Which one? | Local cases of COVID-19 | How many in DC region are vaccinated?
Home » Transportation News » Merge left: Drivers adjust…

A new traffic pattern on the Beltway near the I-270 Spur in Montgomery County caused an unusual backup and left some drivers scratching their heads on Monday.
Listen now to WTOP News WTOP.com | Alexa | Google Home | WTOP App | 103.5 FM 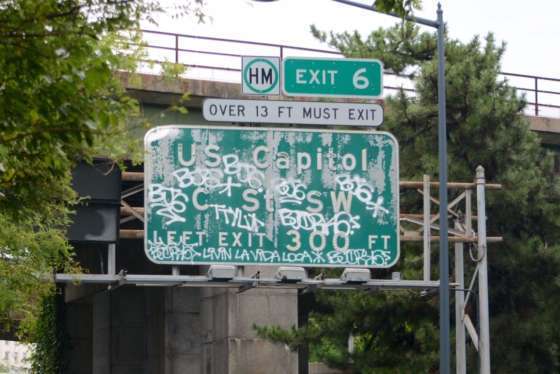 A look at the District’s screwy road signs

Highway signs are supposed to help, but in the District, some signs are having the opposite effect. See the signs around the District that may have drivers — and even pedestrians — scratching their heads.

Drivers on the Outer Loop encountered a newly striped portion of the Outer Loop between the “Big Curve” above the Interstate 270 Spur and River Road.

The southbound lanes that connect the I-270 Spur with the Outer Loop were re-striped late last week to allow all three lanes from the spur to continue through toward Virginia. To make room for the additional through lane from I-270, the highway administration dropped a right lane on the Outer Loop south of the Bradley Boulevard overpass.

The change led to a period of congestion during the first rush hour of the workweek. Drivers cited an unusual backup near Rockville Pike and Old Georgetown Road.

A spokesperson for the highway administration said that with any new traffic pattern, there will be an adjustment period as drivers slow to observe the changes.

The merge is in its final configuration, but the lane markings are temporary. Overnight milling and resurfacing is scheduled to take place one lane at a time throughout the fall months.

Hogan also announced an ambitious plan late last month to construct express lanes around the entire Beltway in Maryland. The state’s future plans to improve traffic on I-270 include extending carpool lanes, adding a third local lane and constructing a new interchange for Watkins Mill Road in Gaithersburg.