I-95 bridge work in Prince William Co. will slow down weekend traffic

The second weekend of VDOT work on a southbound bridge over Neabsco Creek is now expected to close the left lane, just south of Potomac Mills.

UPDATE (June 4, 2017): In Virginia, all lanes have reopened on southbound Interstate 95 in Dale City, at the work zone. The northbound Express Lanes are open, as planned. The southbound Dale City rest area and ramps from Dale Boulevard to southbound I-95 have also reopened.

WASHINGTON — Road work on Interstate 95 in Virginia is expected to create some traffic jams this weekend.

The second weekend of Virginia Department of Transportation work on a southbound bridge over Neabsco Creek — which has been postponed for several weeks due to rain — is now expected to close the left lane on I-95 over that creek in Prince William County, just south of Potomac Mills.

“Our big push was that we wanted to get it done before Memorial Day because of the uptick in traffic,” VDOT Northern Virginia’s Ellen Kamilakis said.

“We got rained out three weekends in a row, so now we’re hoping [for] favorable weather, and [with it] still early enough that not all schools have let out … it might be a little bit heavier traffic this weekend, but hopefully not a huge problem,” she said.

The ramps from Dale Boulevard to southbound I-95 will be closed from the start of work at 10 p.m. Friday through the end of the bridge deck repairs, which could be as late as 6 a.m. on Monday.

In Prince William County, VDOT suggests using Va. 234 to reach southbound I-95, because that is past the work zone. Longer-distance drivers could consider using U.S. 301, depending on traffic.

Due to the work, the 95 Express Lanes are scheduled to point southbound all weekend. With fewer lanes pointing north, that could add to traffic backups on Sunday as people head home.

“We will switch the lanes back into the northbound direction on the 95 Express Lanes once the work is done. If that means that we’re done early on the Sunday, we’ll flip them over,” Kamilakis said.

On the first weekend of this work, a smaller portion of the project was completed by Sunday evening, which allowed the lanes to reverse to the usual Sunday evening northbound direction.

On Friday night only, there is additional road work planned farther south on I-95 that could delay overnight travelers. 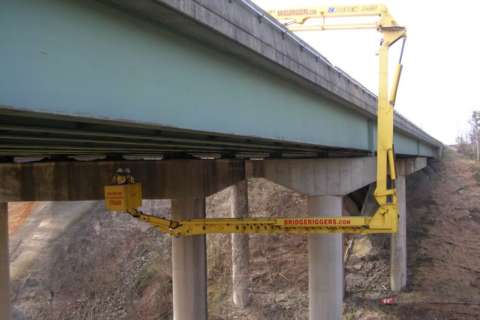