More than 200 businesses and residences are in the path of the planned widening of Route 1 in Fairfax County, which includes a bus-only rapid transit line. A public meeting Tuesday will be the first time property owners can see a list of the homes and businesses that would be affected by the project.
Listen now to WTOP News WTOP.com | Alexa | Google Home | WTOP App | 103.5 FM

WASHINGTON — Plans to widen Route 1 in Fairfax County will leave space in the middle of the road for a future bus rapid transit line, but could take pieces or more of 200 residential and business properties in the area. 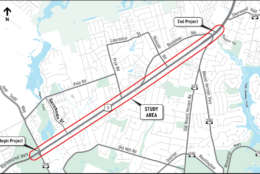 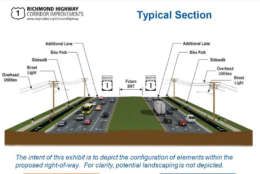 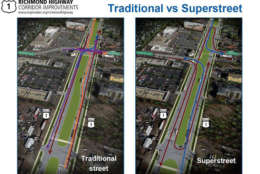 A Richmond Highway Corridor Improvements public information meeting Tuesday night focuses on a $214.8 million project to widen about three miles of the existing road between Jeff Todd Way (near the Roy Rogers) and Napper Road (near the Costco and Wal-Mart) in the Mt. Vernon area from four regular traffic lanes to six traffic lanes.

The work would leave enough space between the new northbound and southbound lanes for bus-only lanes that are in the county’s separate but related long-range plans. Those plans call for nine bus rapid transit stations from the Huntington Metro Station to Fort Belvoir by 2028, with plans for a later extension to Woodbridge.

Virginia Department of Transportation Special Projects Development Manager Amanda Baxter said the Tuesday meeting from 6:30 p.m. to 8:30 p.m. at Mount Vernon High School will also be the first time residents and business owners in the area can see a list of the “200 plus” properties that could have some or all land taken by the project.

“We are going to be acquiring right of way between mid-2019 and we won’t be able to start construction until 2023, because that’s how much right of way [is required]. If you think of Route 1 right now, when you drive that section of Route 1, you’re essentially driving the width of the median that we’re reserving [for bus rapid transit], so you can think about how many properties we’re going to impact with the widening of this project,” she said in an interview.

While property owners who might be impacted can ask specialists questions at Tuesday’s meeting, Baxter said nothing will happen immediately since the footprint of the project still needs to be approved by the Federal Highway Administration.

“We will know the footprint by the end of the year for the most part, but as far as whether your property can stay or go is a whole different discussion,” she said.

Each property is slightly different in what the options are for compensation, relocation or just losing a sliver of land with help rebuilding a parking space or two.

“There’s opportunities along this corridor where there’s frontage roads, where we could probably leave some of the actual structures in place, but we will be bringing the road right up closer to the structures,” Baxter said.

In those cases, there could be noise walls built too.

“We might encroach on your property, however we could take the parking that we’re taking in the front of your property and replace it somewhere else on your parcel for example, and you could stay in place. That’s just an example of how there’s a lot of different answers depending on how close you are to the road, how close you are to the footprint, what your business is like, if you’re in a residence,” Baxter said.

VDOT plans to begin moving utility lines in 2019, before the more significant construction begins in 2023. The new Route 1 would open in 2026.

Drivers could see fewer opportunities to make left turns across the roadway, as part of what Baxter describes as a “superstreet” concept with special lanes used to make turns. An alternative would place traffic lights at major intersections, but still reduce the number of left turns allowed in or out of side streets or driveways.

“If you look ahead to the future bus rapid transit, we are looking to have long segments that the bus can run. You want to have as much availability to run the buses free-flowing to get that travel time saving so people would actually want to use the bus over driving, so we are looking to accommodate having longer stretches for the bus to run and then accommodate station platforms … in the median of Route 1, and then all the turn lanes would be built around that,” Baxter said.

The completed roadway will also include sidewalks and separate bike paths in the area where today people walking or on bikes can have a tough time traveling safely.

VDOT plans to hold a second public information meeting and release a draft environmental impact statement on the project later this year, followed by a formal public hearing next year.

Fairfax County is funding the project, and has yet to officially designate funding for construction or much of the right of way purchases. The county largely plans to get the $190 million in additional funding through a regional funding body, the Northern Virginia Transportation Authority.

Anyone who cannot make the Tuesday night information meeting has one month to submit comments as part of this input phase via mail, email or the internet. 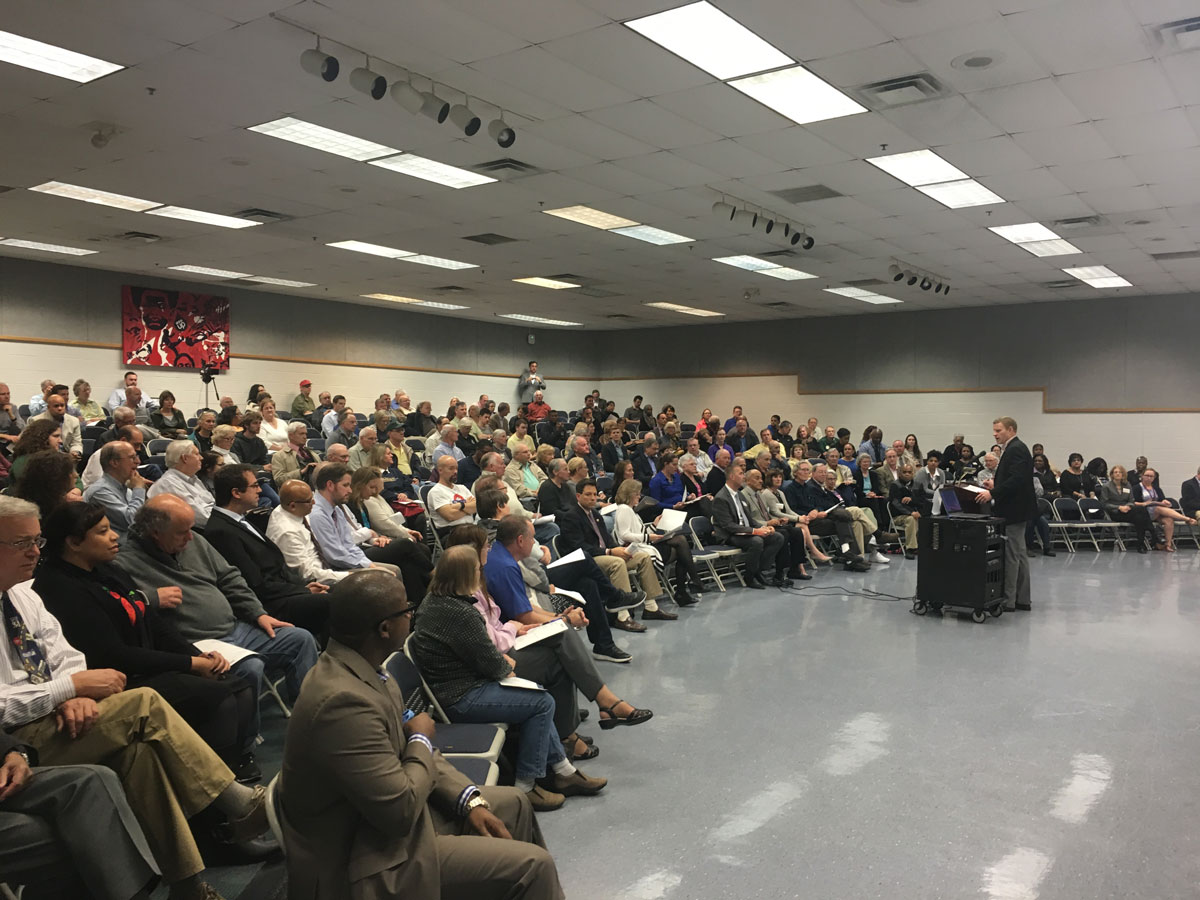 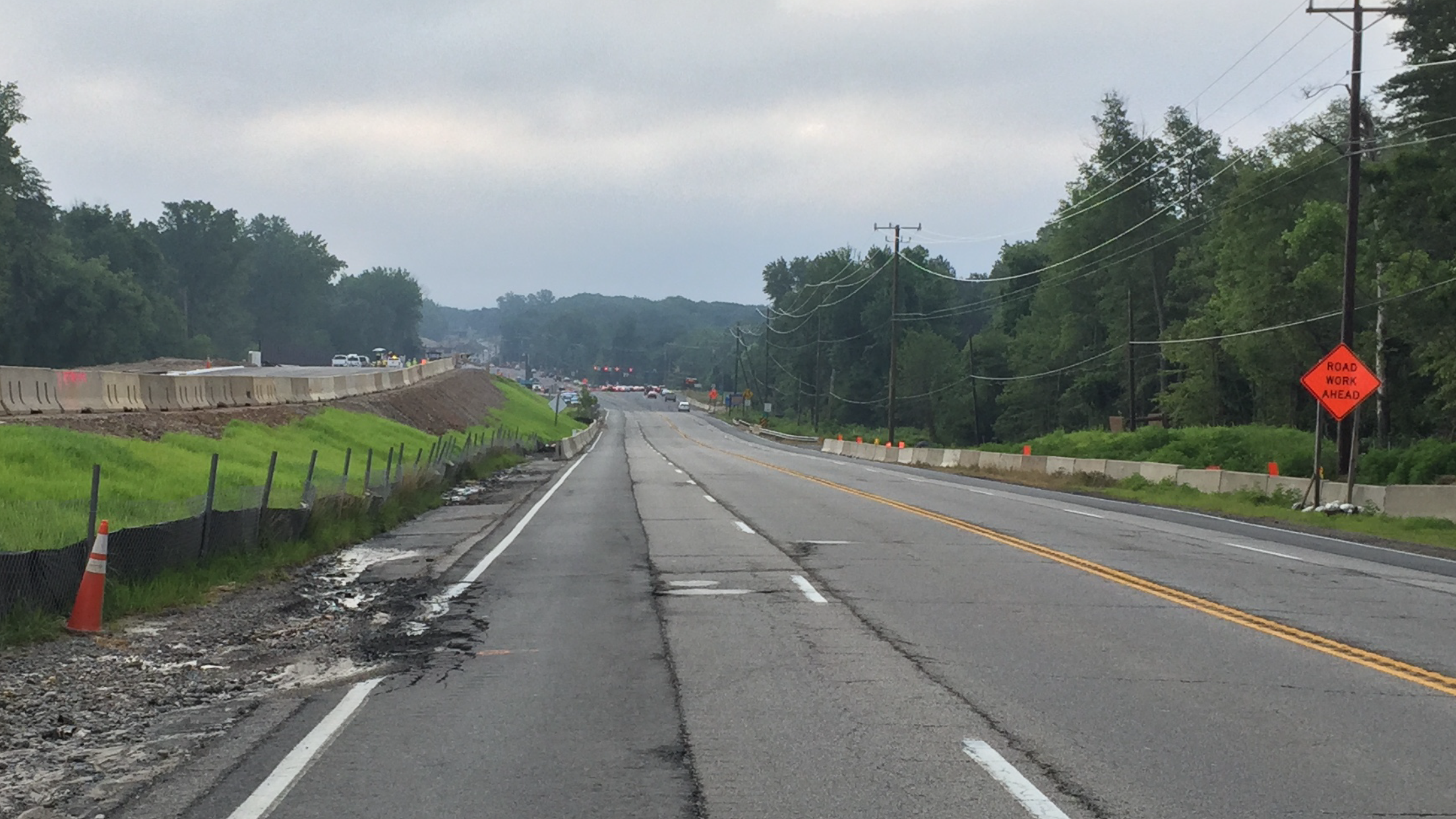