The average speed during rush hour dropped to around 30 mph on average in 2015, according to the latest Mobility Assessment Report.
Listen now to WTOP News WTOP.com | Alexa | Google Home | WTOP App | 103.5 FM

WASHINGTON — No matter where you look throughout Montgomery County, it’s taking longer to drive around during both morning and evening rush hours.

The biggest sign that things are slowing down is the average speed during rush hour, which dropped to around 30 mph on average in 2015, according to the latest Mobility Assessment Report done by the county’s planning board. It is a decrease of about 4 mph compared with 2011.

While speeds have gone down, unpredictability has gone up.

The report uses what it called the Planning Time Index (PTI), which figures how much time should be added on top of what it would normally take to reach a destination during “free flow travel” with 95 percent certainty.

That index rose by 40 percent, meaning that drivers need to add 40 percent more time to their trips. On average, if you had to make a trip that is normally 15 minutes without traffic during rush hour in 2011, you would need to add an extra 7 minutes to make sure you arrived on time.

Many of our congested roads are inside the Capital Beltway, thanks to everyone commuting into the District.

However, the worst stretch of road, according to the report, is MD 27 in Clarksburg.

The section between Brink and Davis Mill Roads had an average congestion of 100 percent on the Travel Time Index (TTI), the actual time traveled compared with free-flow travel. That means it takes twice as long to make a trip during rush hour than outside of it. The report suggests this congestion is partly due to the widening project going on during the study.

The second-worst stretch of road in the county, all thanks to commuting, is southbound on Colesville Road (U.S. 29) during the afternoon rush, going from the Capital Beltway into the District.

This also had an average congestion of 100 percent — specifically, the heaviest traffic crawls from Franklin to Georgia Avenues. Monday afternoon is the best time of the week on the road, only about 80 percent slower than usual. It is its worst Thursday and Friday afternoons, taking almost 140 percent longer to make that drive.

Connecticut Avenue between the District line ant the Capital Beltway is awful no matter the commute.

The report suggests this is mostly due to the many people who work at the National Institutes of Health and the Walter Reed Medical Center.

Here are the top 25 most congested roads in Montgomery County: 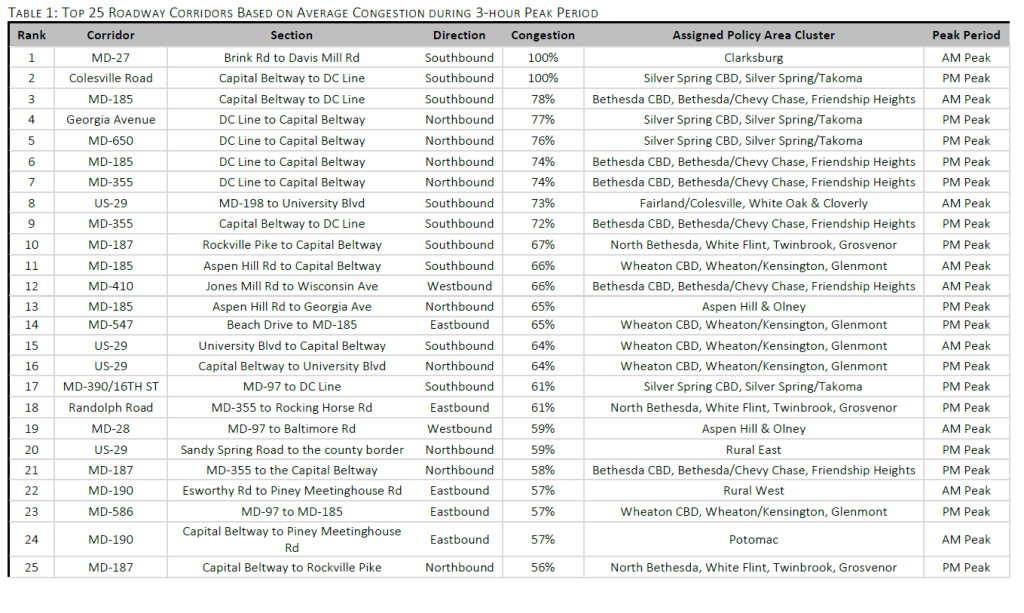