Metro tells riders to find other ways to get to work 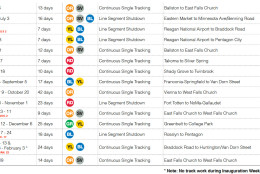 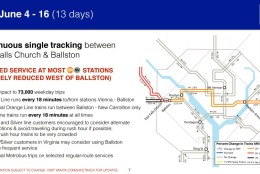 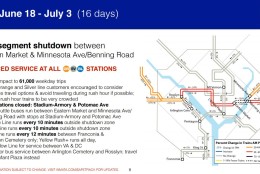 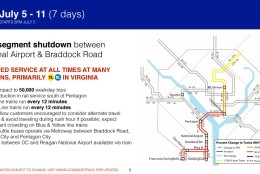 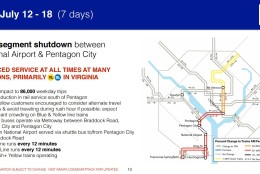 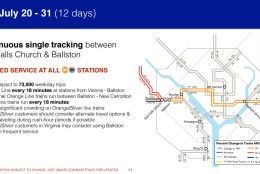 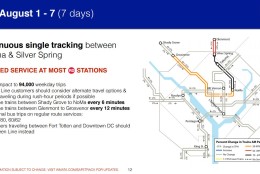 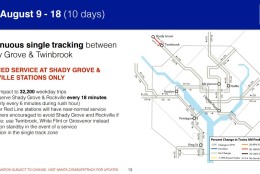 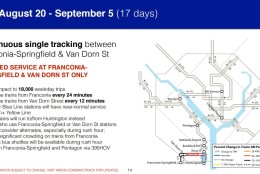 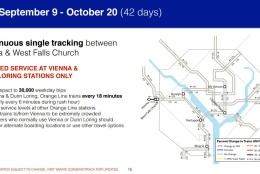 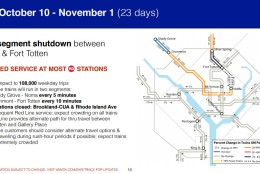 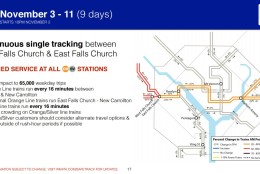 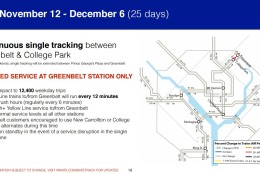 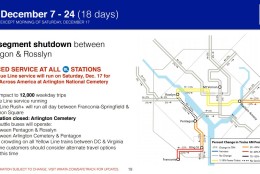 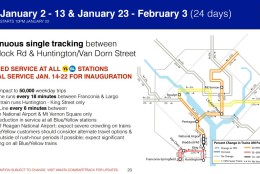 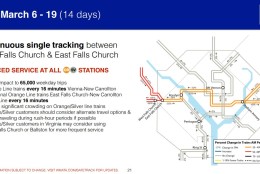 WASHINGTON — With major track work beginning next month set to disrupt Metro rides around the clock starting with the Orange and Silver lines, Metro says riders need to find other options, and a former leader of the agency says Metro has run out of options of its own.

“If you have run out of options, and if your situation over a long period of time has put you in a condition where the only way out of the hole is to sort of bite the bullet and move forward, I think, that’s a decision that’s a tough one and it has to be measured against other impacts and options, but in this case it’s the one that Paul and the WMATA Board felt was necessary, so we certainly understand the need to take these kinds of actions,” White said Thursday.

Other cities, such as Chicago, have implemented long-term track work plans on all or parts of lines, and White sees alternate options, such as buses or other nearby stations, as crucial to limiting the impact on the community.

Metro General Manager Paul Wiedefeld acknowledged that, while the final version of the track work plan that was released Thursday will include some shuttle buses at stations that are closed entirely or most significantly affected by the rotating closures, many riders may be better off finding another way around.

“Particularly during the peak-hour periods, we want people to consider other alternatives,” he said.

Riders will need to check not just whether the stations or stretch of track that they use are affected directly by work each week, but also whether the work is on the line or lines that they use.

For example, during what is now the very first stretch of 24/7 single-tracking, between East Falls Church and Ballston from June 4-16, service will be cut by two-thirds west of Ballston, by more than a third between Ballston and Rosslyn, by nearly half between Stadium-Armory and Largo and by 28 percent between Rosslyn and Stadium-Armory.

That means trains will only be scheduled every 18 minutes for those 13 days on the Silver Line, and every 18 minutes between Ballston and Vienna, down from a train every six minutes or so during current rush hour.

The cuts the following 16 days, from June 18 to July 3, are even more dramatic. Metro will shut down the tracks between Eastern Market and Minnesota Avenue and Benning Road. There will be fewer than half the usual number of trains between Eastern Market and Rosslyn, a 40 to 43 percent cut in trains on the Orange and Silver lines west of Rosslyn, and no trains between Rosslyn and Arlington Cemetery.

“The impact on the region will be great,” Wiedefeld said. “Riders may have to avoid Metro altogether when we’re working on some of these lines because of the reduced service that we will have, but from my estimation the priority must be safety over service and we have to catch up.”

The Green Line is the least affected by the plan.

While other track work is scheduled beyond the 24/7 single-tracking or shutdowns, the first extended 24/7 impact on the Red Line is projected to come in August, when single-tracking between Takoma and Silver Spring cuts train service up to 75 percent on parts of the line.

The Red Line also sees dramatic cuts Oct. 10 to Nov. 1, when there are no trains between NoMa-Gallaudet and Fort Totten. Metro expects the Red Line work to affect up to 108,000 trips each weekday during the 23-day stretch.

“Physically, just to get the numbers of people [moved], we need them to look at other alternatives. We will be providing … additional bus service; we’re working with the local jurisdictions to provide alternatives as well,” Wiedefeld said.

“We’re looking at everything from, obviously, telecommuting, to more flex time for people getting into work, to incorporating parking restrictions — things of that sort, to just ease both the alternative if you’re taking a car [and] provide alternatives on the transit side,” he added.

The Office of Personnel Management is leaving decisions on telework and other changes for federal workers up to individual agencies since the track work will rotate around the system through at least March 2017.

Many local transit agencies do not have extra buses or the drivers who would be needed to put them into service.

“During peak periods we’re all stretched; we’re all trying to be able to deliver the service — so I think it varies at different times of day,” Wiedefeld said.

As part of the push to get more track work time and ease the strain on the system, Metro will no longer run trains until 3 a.m. on weekends starting next month.

White, the former general manager, emphasizes that transit systems across the country are all struggling in some way to catch up.

“As a nation, we have simply dug ourselves into a very deep hole by not investing in all types of infrastructure, from water and wastewater to power and transportation. Unfortunately, the public transportation industry is a poster child for our nation’s decades-old lack of investment,” he said.

“We shouldn’t be surprised by the challenges that our transit systems are facing across the country,” White said.

Wiedefeld said the trackwork plan is not a “cure-all,” but simply shows how much work Metro should have been doing for years.

“It really just reflects the need for continued investment on an annual basis … I think we are the example of what occurs when you do not do that: the deterioration of the service, the unsafe service, and then the need to do drastic actions to bring it back up,” he said.

OPM: Agencies will decide how to cope with reduced Metro service