DC officials are visiting five intersections with some of the highest crash rates in the city in search of ways to improve safety and reduce the numbers of crashes involving pedestrians, bikes, motorcycles and vehicles. See map.
Listen now to WTOP News WTOP.com | Alexa | Google Home | WTOP App | 103.5 FM
(1/3) 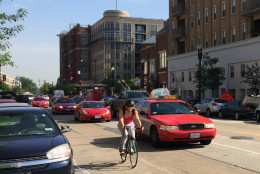 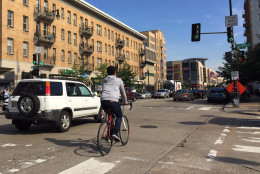 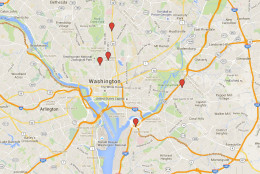 WASHINGTON — Some of the District’s most dangerous intersections are going under the microscope.

In all, leaders are visiting five “high crash” intersections to look for ways to make them safer.

Among them is the intersection of 14th Street and Columbia Road in Columbia Heights. The corner has been the site of nearly 100 accidents over a three-year period beginning in 2013, according to numbers from the District Department of Transportation.

“There’s been a lot of development here. It’s been very welcome,” said D.C. Councilmember Mary Cheh, who chairs the Committee on Transportation and the Environment. “But by the same token, there are growing pains when that happens.”

The intersection is also the worst in the District when it comes to bike crashes, according to Sam Zimbabwe, associate director for planning for DDOT.

He said sideswipe accidents, as drivers tried to turn, were the most common at the intersection. Riders in bike lanes have also been hit by people opening car doors.

“One of the things you can do is make the markings a lot clearer, so that cars are aware that this is a bike lane, and that they have to pay attention,” Cheh said.

Leon Anderson, acting safety manager at DDOT, agreed that renewing faded bike lane markings so they stand out better would improve safety. He said DDOT is also considering a “bike box” that would give bike riders a designated place to stop, just behind the crosswalk.

Anderson said the intersection is unusual because at times a quarter of the traffic there can be made up of bike riders. In other areas, cyclists might make up only 2 to 4 percent of traffic.

While the Columbia Road intersection has had many accidents in recent years, none have been fatal. That’s not the case for the intersection of Firth Stirling Avenue and Suitland Parkway in Southeast, which also received an in-person visit from District staff. There, engineers found that allowing cars to turn left on a green light was leading to crashes. Now, DDOT is working to only allow left turns when drivers have a green arrow signal.