WASHINGTON — District officials have been pounding the pavement, visiting the most dangerous intersections in the city as part of…
Listen now to WTOP News WTOP.com | Alexa | Google Home | WTOP App | 103.5 FM
(1/2) 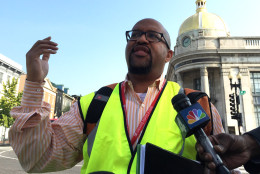 WASHINGTON — District officials have been pounding the pavement, visiting the most dangerous intersections in the city as part of a fact-finding mission.

“We’ve gone to five intersections that are perennially on the list of the most dangerous intersections in the District,” says Mary Cheh, Chair of the D.C. Council Committee on Transportation and the Environment.

Cheh and leaders from the District’s Department of Transportation are exchanging ideas with community members about how best to help cyclists, walkers and cars share the road safely.

“Thinking about simple changes — to pavement markings and how the roads are stripped to the potential need to start a capital project,” says Sam Zimbabwe with DDOT.

Longer-term safety solutions might include widening concrete medians to provide walkers with a bigger mid-road safety zone. Quicker fixes might include adjustments to traffic signal timing or a coat of paint.

“Paint the bike lanes green all the way through the intersection,” says Greg Billing, executive director of the Washington Area Bicyclists Association. “Make it really clear to where (car) drivers and bus drivers know where the bike lane is. It can be done in weeks.”

Some suggestions may not prove popular with everyone.

“We’ve been trying, with the help of the Georgetown (Business Improvement District), to get red light cameras put in this intersection for several years now,” says Advisory Neighborhood Commissioner Bill Starrels.

Starrels is referring to the intersection of Wisconsin Avenue and M Street Northwest where an auxiliary Metropolitan Police officer was killed in 2005 while directing traffic. The main intersection in Georgetown is among the top 10 most dangerous intersections in the city based on 2014 crash data.

“It’d free up traffic. In other words they (cars) would not be blocking the box because nobody wants a red light ticket, they’re expensive,” Starrels says.

Money from city coffers will be needed for many of the suggestions to become a reality, but that doesn’t discourage Transportation Committee Chair Cheh.

“I’m going to be a pest with DDOT, (asking) what are you going to do to fix this, this and this,” Cheh says while noting she’s also offering resources. ” … my committee providing money so improvements can be made.”

Click on each intersection in the map below to see more information about each of the 24 most dangerous intersections in D.C., according to 2014 crash data. The District ranked these intersections based on crash frequency, crash rates and severity.