Prince George’s County police said the teen turned himself in on Tuesday. A 14-year-old who was initially arrested in that shooting has since been released, after authorities determined he was not involved.
Listen now to WTOP News WTOP.com | Alexa | Google Home | WTOP App | 103.5 FM

A 16-year-old student has been charged as an adult in connection with last Thursday’s shooting of a student outside Suitland High School.

Prince George’s County police said Wednesday the teen turned himself in on Tuesday. They also said that a 14-year-old who was initially arrested in that shooting had been released after authorities determined he was not involved.

The shooting happened around 10 a.m. Thursday near the school’s football stadium in the 5200 block of Silver Hill Road, and was witnessed by several students. Police say an argument among a group of kids escalated into a fight before the 16-year-old allegedly pulled the gun and began firing.

The 14-year-old shooting victim — a ninth grader — remains in the hospital with injuries that are not considered life-threatening.

An investigation into the shooting is still underway. Anyone with more information about this case is asked to call the police at 301-516-5230. Anonymous tips can be provided by contacting Crime Solvers online or calling them at 866-411-TIPS (8477).

Prince George’s County Public Schools also remind parents and students that bullying and weapons violations can be reported through their website or mobile app. 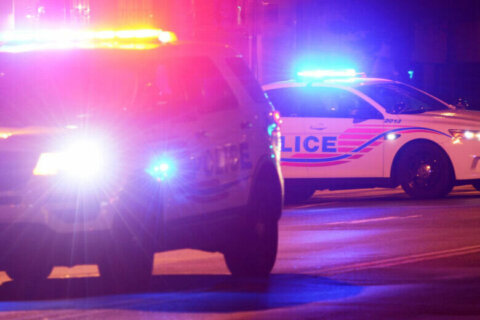