A Catholic school in Northeast D.C. has been the victim of two vandalism incidents over the course of about four days, and the school’s principal claims they’ve been the victim of hate crimes.
Listen now to WTOP News WTOP.com | Alexa | Google Home | WTOP App | 103.5 FM

The first incident at St. Anthony Catholic School, in the Brookland neighborhood, happened either Wednesday night or Thursday morning, the D.C. police said. A statue of St. Anthony was turned over and the head was stolen. A window sill and playground benches were damaged as well.

The damage to the statue was particularly disturbing to the school’s principal, Michael Thomasian.

“When you attack a symbol of the school, a Catholic school, and when you target someone that represents who we are in our mission, and you cut off the head and take it with you, that’s full of hate,” he said.

The statue, he said, is special to the parish community, and he remained hopeful that the head can be recovered so the statue can be restored.

“We hope to rebuild him if we can find the head. I really want anybody who’s listening today to [know] if you’re in Brookland, or taking a walk or walking your dog and you happen to see a St. Anthony head, we want it back,” he said.

The next incident happened either late Sunday night or early Monday morning – about two weeks before classes start there. The culprits broke in through an unlocked window and stole $1,400 in cash. They also broke candles and two other statues.

Police are treating it all as one case, Thomasian said, and detectives have recovered clothing that was left at the scene as evidence.

D.C. police said both incidents are being investigated as suspected hate crimes.

After the first incident last week, a GoFundMe was created to help the parish, and Thomasian expressed his gratitude.

“I’m not surprised that people have shown their love and support in this way, and it means a lot to us,” he said. 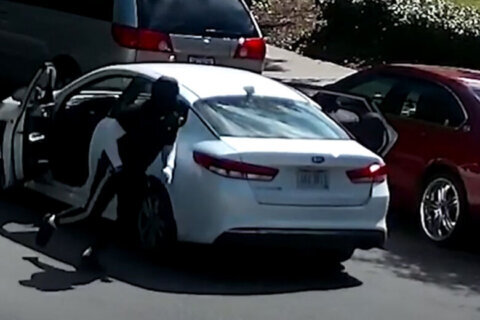