Virginia has added a dedicated call center to go with its newly-launched preregistration website to help residents who either don’t have internet access or are struggling to get a COVID-19 vaccine appointment.

Virginia Gov. Ralph Northam announced that the call center — which has around 750 people staffing it — will begin taking calls Wednesday, but urged residents to try to use the preregistration website if they were able to so that more people without internet access could be helped.

“We know that some people prefer to talk to a live person — I’m one of those people,” Northam said. “That’s why we also made a dedicated call center a priority, and that launches today.”

The call center is equipped to take calls in English and Spanish, and residents can request a callback in over 100 other languages, according to Northam.

“This new system will provide functionality we have all been asking for,” Northam said. “One: It’s centralized, which makes it easier on our local health departments. And two: It gives you confirmation you’ve signed up and periodic update emails.”

Northam said the website had already processed around 240,000 Virginia residents since going online Tuesday, and that he had used the site to preregister for an appointment.

“That tells us that the system is working, and it is meeting a demand,” Northam said.

Those who had already preregistered with their local health department will not need to do so again on the new site as those records are in the process of being transferred to the unified database.

He said an updated page done by someone who is fluent in Spanish is currently being worked on.

“Yesterday evening, we acquired a vendor through our health equity work group … they’ve translated it,” Oliver said. “This vendor utilizes native speakers of Spanish and so this is human beings as opposed to AI doing the translation, so it’s much more reliable and culturally proficient.”

Oliver said it would take around 24 hours for the updated Spanish-language page to go live.

Northam also said that the number of Virginia residents getting vaccinated is going up. Virginia is administering an average of 34,000 shots per day, but the state’s goal is 50,000 shots a day.

Some 366,000 people have been fully vaccinated in Virginia, which has a population of about 8.5 million. 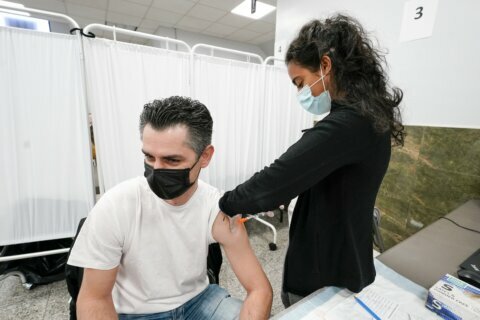