Hundreds of cars line up for food distribution in Montgomery County

Hundreds of cars lined up Friday at a Montgomery County, Maryland, park to receive food assistance.

Catholic Charities DC has been organizing large-scale food events in D.C. and Maryland to help those affected by the COVID-19 pandemic. On Friday, staff and volunteers from the charity were at Bohrer Park in Gaithersburg, and distributed 500 grocery boxes and ready-to-eat meals in less than two hours.

The event was supposed to start at noon, but as cars started to line up, it started around 11 a.m.

As there were still cars lined up after the food had been distributed, they received a $50 grocery card that can be used at Giant.

This is the charity’s third large-scale distribution event, which started when the pandemic struck the D.C. area.

“We saw more people without jobs, steady income. One of the first things we heard from them is they need assistance with food,” said spokeswoman Kate Kennedy.

Kennedy said there was around a 200% increase in the number of people going to the charity’s food pantries in D.C. and Maryland, and they felt more had to be done.

At these large-scale food distribution sites, drivers pull up in their cars and open the trunk. Then, a Catholic Charities DC staff or volunteer will place a grocery box and read-to-eat meals that are enough for five days for a family of four.

The economic fallout of the coronavirus pandemic has led to people losing their jobs or being furloughed, and “What we’re seeing consistently is that there’s a growing and substantial need for food assistance in the Washington metro area,” Kennedy said.

She said during the food distribution at Hyattsville, she met a family where both the parents previously had steady incomes but lost them when businesses shut down.

“They were in a tough spot,” Kennedy said. They also had another family in a similar situation, and the food they received helped not just them but their extended family.

The first two events were in Temple Hills and Hyattsville, where some 1,400 groceries and ready-to eat meals were distributed.

The next event will be on Tuesday at the Basilica of the National Shrine of the Immaculate Conception in D.C., and 800 boxes and meals are expected to be given out.

In addition, there will be something extra along with the meal that Kennedy said will “surprise and delight the people who will be coming in for food assistance.” 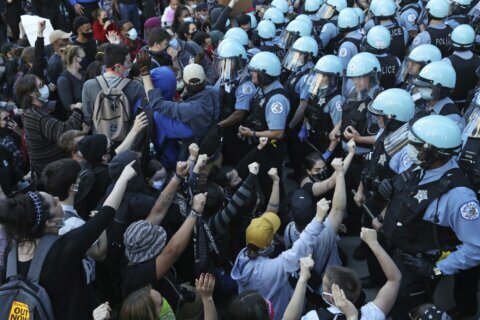