Members of Congress are pressing to get billions of dollars to create a national testing strategy for the coronavirus in the next major piece of legislation to deal with the pandemic.
Listen now to WTOP News WTOP.com | Alexa | Google Home | WTOP App | 103.5 FM

Members of Congress are pressing to get billions of dollars to create a national testing strategy for the new coronavirus in the next major piece of legislation to deal with the pandemic.

House Speaker Nancy Pelosi has said a measure Democrats are crafting this week must include money for testing, though it’s not clear exactly how much that will be.

Some House Democrats are urging $250 billion for COVID-19 testing and contact tracing for front-line workers.

In a letter to the House and Senate leadership, lawmakers including House Agriculture Committee Chairman Collin Peterson, D-Minn., said that about 1.6 million diagnostic tests are done in the U.S. each week — still “woefully short” of what is needed.

Health experts agree that current testing levels fall far short of what they need to be. The lawmakers cite a report by the Rockefeller Foundation that estimates up to 30 million tests a week may be necessary.

In the Senate, Sen. Patty Murray, D-Wash., has proposed $30 billion in emergency funding for faster testing and development of new tests and rapid response tests.

Murray and other Democrats pressed for more testing during a hearing last week before the Senate Committee on Health, Education, Labor and Pensions.

“States need more than vague musings from the White House,” Murray said of testing goals. “They actually need numbers and timelines and clear expectations of how the federal government is going to get us there.”

During a conference call Monday to governors, Vice President Mike Pence told them the federal government is recommending all nursing home residents and staff be tested for the virus in the next two weeks, The Associated Press reported.

The Senate panel will hold a hearing related to COVID-19 and safely reopening on Tuesday. Scheduled witnesses include Dr. Anthony Fauci, a member of the White House coronavirus task force.

Fauci plans to testify remotely; he has gone into what has been described as a modified quarantine after exposure to a White House staff member who tested positive for COVID-19.

Members of Congress said they are pushing for more tests because governors continue to say they don’t have nearly enough. Maryland Gov. Larry Hogan last month announced the state had bought 500,000 tests from South Korea as part of an effort to get more people tested.

There have been some delays in the rollout of those tests, but Hogan recently said officials are working through various issues to get them in place.

Harvard University’s Global Health Institute has outlined estimates for the number of tests each state needs by May 15 to contain the virus outbreak. The institute said a positive test ratio of 10% or less is the figure needed, citing guidance from the World Health Organization.

Maryland, Virginia and D.C. are still well above that threshold, according to figures cited by the institute through May 6.

The Covid Tracking Project provides overall figures for each state.

D.C. Mayor Muriel Bowser said Friday that the District has continued to improve testing and contact tracing, but that the number of people dying of the virus remains high.

“You see our numbers, that we haven’t seen a sustained plateau, and certainly not a decrease in our numbers,” she said, noting it was premature to consider opening establishments such as restaurants.

Virginia Gov. Ralph Northam last week indicated that, with a lot of restrictions, restaurants will likely be able to start reopening on May 15.

Bowser declined to say whether she would extend a stay-at-home order beyond May 15. 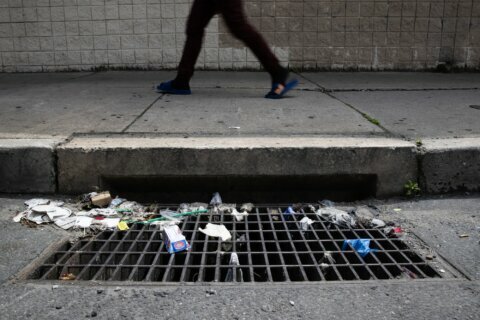