D.C. Mayor Muriel Bowser said the District is preparing for up to 93,000 people in the city to be infected with the coronavirus throughout the course of the pandemic and that the number of infections won't peak until the summer. Here's the latest.
Listen now to WTOP News WTOP.com | Alexa | Google Home | WTOP App | 103.5 FM

CDC to recommend covering face when outside

The White House says the Centers for Disease Control and Prevention is recommending that Americans cover their faces when leaving the home, especially around other people. But President Donald Trump is calling it “voluntary” and says he himself won’t wear a mask.

Says Trump: “I’m choosing not to do it.”

The latest guidance suggests that Americans use makeshift coverings, such as T-shirts, scarves or bandanas to cover their noses and mouths. Medical-grade masks, especially N95 masks, are to be reserved for those on the front lines of trying to contain the pandemic.

Read the story from The Associated Press.

Surgeon General Jerome Adams and the CDC shared a way to make a mask without sewing. Watch a video below:

Metro said that it is limiting rail and bus hours starting Monday, April 6. The move is part of the effort to limit front-line transit workers’ exposure to the public during the COVID-19 crisis.

Starting Monday, Metrorail will close at 9 p.m. every day. New rail service hours will be Monday to Friday from 5 a.m. to 9 p.m., and Saturday and Sunday from 8 a.m. to 9 p.m.

D.C. Mayor Muriel Bowser said the District is preparing for up to 93,000 people to be infected with the coronavirus throughout the course of the pandemic and that the number of people who are hospitalized with serious illness won’t peak until the summer. That figure is based on a model of infections that District planners are using.

The number of estimated infections is cumulative and most people infected with COVID-19, the disease caused by the novel coronavirus, are expected to recover, Bowser said.

However, under the most “severe” estimates, more than 1,000 District residents could die, Bowser said. A “mild” number of deaths is 225 and a “moderate” number is 440.

The CHIME model, which D.C. is using to project coronavirus infections, predicts the peak in hospitalizations won’t come until late June or early July, Bowser said.

Bowser said another model the District had looked at — known as IMHE — may overestimate the benefits of social distancing.

Regarding the total number of COVID-19 infections, Bowser said: “This is a tough number to have to report but we think that we’d rather be on the side of underestimating the impacts of social distancing than presenting too rosy a picture.”

The CHIME model makes projections based on total infections and assumes some random mixing of infected people.

The models are only projections, officials said. Bowser said the District has chosen the model with which it can most comfortably prepare for the needs of the city’s residents. Bowser said she was more comfortable choosing a model that assumes people do not follow all of the government’s suggestions for social distancing perfectly.

About the model, Bowser said, “We pray it is wrong.”

In the midst of the coronavirus outbreak, travelers might be dreaming of a beach escape, but the mayor in Ocean City, Maryland, reminded visitors that the town remains closed to guests.

The beach and boardwalk are closed to visitors until at least April 30, and all hotels and rentals are restricted to essential use only, such as for visiting health care workers.  Also, numerous beach events, including Springfest, have been canceled.

“It’s important for everybody to stay home right now, close to your primary medical providers, and to protect your families and the families of others,” said Mayor Rick Meehan in a video message posted Friday.  “We do not have the hospital resources right here in Worcester County to provide medical service for populations from outside of this area if in fact this pandemic grows.”

He said once the crisis ends, the town will once again welcome guests.

“The sun will shine, the sand will be warm, and the salt air will be there to remind us all of how lucky we are and how far we have come,” Meehan said.

You can still get a peek at the boardwalk from afar, because the town’s webcam is still operating.

The projection of total COVID-19 cases was presented as Bowser laid out the District’s plan for a “medical surge” to deal with the expected influx of cases.

Under the District’s modeling, when hospitalizations peak in the early summer, the demand for hospital beds will outpace the city’s current capacity.

Currently, across the city’s seven major hospitals, there are only about 2,500 total beds, according to documents presented Friday.

D.C. Health Director Dr. LaQuandra Nesbittt said the District is working with the D.C. National Guard, the Federal Emergency Management Association, the U.S Army Corps of Engineers and local hospitals to more than double their capacity. These efforts include emptying current hospital beds by postponing elective procedures, reopening shuttered facilities and standing up “alternate care sites” outside of hospitals.

Bowser said she has to consult with public education leaders before she can offer a firm date on when schools will reopen.

It’s unclear what the projections mean for other measures Bowser has taken to curb the spread of the virus, such as closing nonessential businesses and banning dine-in services at District restaurants.

Coronavirus cases in 60 Md. nursing homes; ‘This virus is everywhere’

In Maryland, officials say they are particularly concerned about coronavirus cases and clusters of cases at 60 Maryland nursing homes and long-term facilities in the state, including several in Montgomery County.

That includes a “major outbreak” at the Pleasant View Nursing Home in Carroll County, Maryland, which has 99 confirmed cases, resulting in 42 patients being hospitalized and five deaths.

Overall, of the 60 nursing homes with outbreaks, 46 of them reported having between one and four cases; another 12 facilities reported between seven and 10 cases.

“We now have widespread community transmission,” Maryland Gov. Larry Hogan said during a news conference Friday. “This virus is everywhere and it is a threat to nearly everyone.”

Starting Friday, the Maryland Department of Health is ordering all staff at nursing homes and assisted living facilities to wear masks at all times during their shifts.

Fran Phillips, Maryland’s deputy secretary for public health, said there is clear evidence that some of the cases involving nursing homes have been driven by staff members who aren’t exhibiting any symptoms but who are still infectious.

Phillips who called the coronavirus “sneaky” said the outbreaks in nursing homes are concerning because the facilities have already instituted procedures to control infections, including screening staff members.

“What we are seeing is that despite these measures, people are still getting the virus,” Phillips said.

In addition to mandating the use of masks, Phillips said teams from the health department are going into facilities where cases have been reported and testing everyone in the unit, even people without symptoms.

Overall, in Maryland, the number of coronavirus cases tripled in less than a week, to 2,758 cases,

Of those, 416 were hospitalized and 43% of those patients were in intensive care as of Friday afternoon, Hogan said.

While the virus is most concerning to older people and people with weakened immune systems, who are more likely to develop severe illness, half the state’s total cases involve patients younger than 50. More than quarter of Marylanders who have been hospitalized with COVID-19 are under 50, Hogan said.

Phillips said a task force of medical experts convened by the governor are looking at range of modeling but she declined to provide a projected date for when the state might see a surge in cases, as D.C. provided Friday.

“We are on the beginning of a curve,” Phillips said. “The curve is going up and we are accelerating in terms of the percentage of new cases. So where that’s going, how soon — that is not something that we have clarity on at this point.”

Marylanders who contact their financial services providers are eligible for immediate relief, including a 90-day period of forbearance or deferral for mortgage payments, during which no late fees will be charged and no negative impact to credit.

The Trump administration on Friday abruptly changed its description of the Strategic National Stockpile and put forward a narrower vision of the role the federal government’s repository of life-saving medicines and equipment should play in supplying states’ needs.

The change conforms with Trump’s insistence that the stockpile is only a short-term backup for states. The alteration of the language describing the stockpile was reflected on government websites on Friday, a day after Jared Kushner, Trump’s son-in-law and White House senior adviser who has taken a larger role in the coronavirus response, offered a new argument about the supplies.

Northam said the response to the coronavirus will have a major impact on the state’s budget, and that Virginia is now “facing a recession.”

He said he has directed the heads of state agencies to begin taking steps to reduce spending now, including eliminating discretionary spending for the remainder of the fiscal year.

“We are directing our agencies to prepare for budget cuts for the next budget cycle starting in July,” Northam said. “We have to rearrange our priorities now.”

Unemployment numbers have skyrocketed in Virginia in the last week, placing stress on Virgina’s unemployment website.

Northam said more than 114,000 Virginians had applied for unemployment benefits.

“This is a very large number, but by next week, it will unfortunately seem small,” Northam said.

The Virginia unemployment website has received upgraded server capacities and call centers have increased their staffing by over 25%, according to the governor.

The total number of coronavirus cases in D.C., Maryland and Virginia, have surged past 5,500, according to the latest figures from area health departments.

In Maryland, the number of new reported cases swelled to 427 on Friday — the highest single-day total of new cases in the state since the outbreak began, pushing the overall total number of coronavirus cases to 2,758.

In Virginia, the number of new cases grew to 306 Friday — also the highest single-day total. The total number of cases in Virginia stood at 2,012 Friday.

More than 103 people have died from the coronavirus in the region, according to health department data. There have 46 deaths in Virginia; 42 deaths in Maryland; and 15 deaths in D.C.

Overall, more than 48,000 people have been tested for the coronavirus in D.C., Maryland and Virginia.

Virginia Gov. Ralph Northam said Friday that several sites had been identified and approved for conversion to field hospitals — which will help free up capacity in existing medical facilities, according to the governor.

In Northern Virginia, planners have selected the Dulles Expo Center, which can accommodate up to 315 acute-care beds or 510 non-acute beds, Northam said.

The Hampton Roads and Richmond Convention Centers will also be used as alternative care sites.

The governor said that the commonwealth currently projects May as the time for highest surge in COVID-19 cases. The alternative care sites are expected to be completed in six weeks, Northam said. 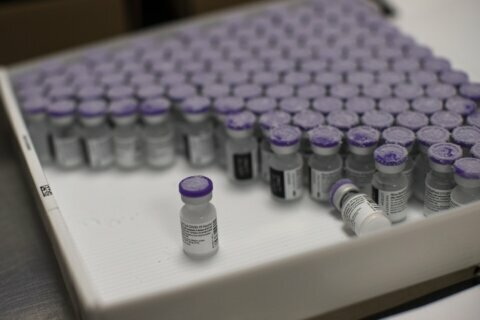 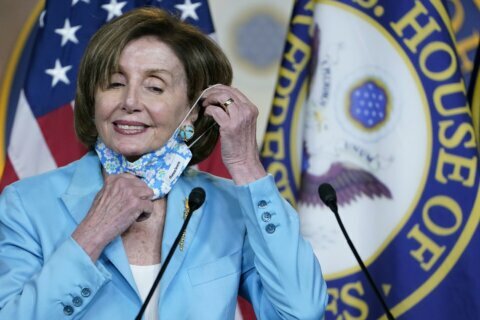 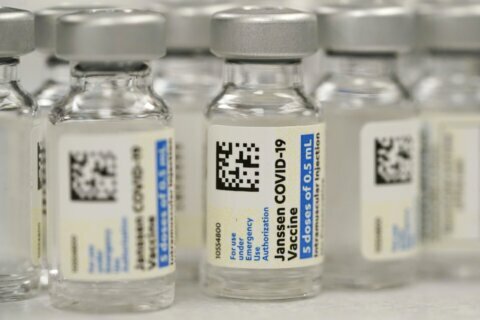