As storms grow more violent and Louisiana loses more of its coast, the family that makes Tabasco Sauce is fighting erosion in the marshland that buffers its factory from hurricanes and floods.
Listen now to WTOP News WTOP.com | Alexa | Google Home | WTOP App | 103.5 FM
(1/17) 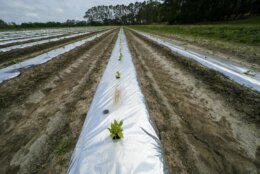 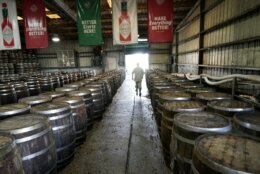 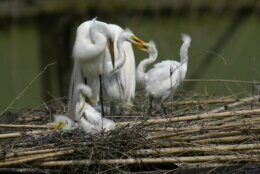 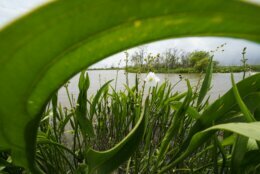 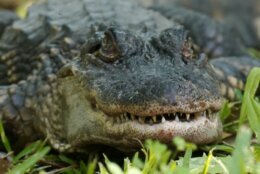 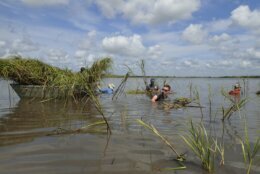 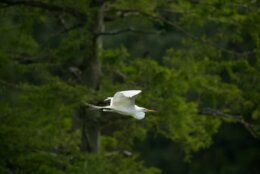 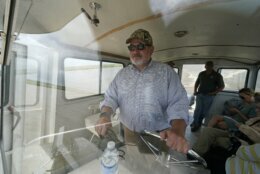 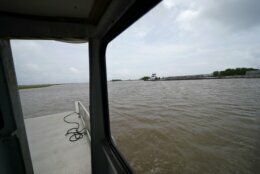 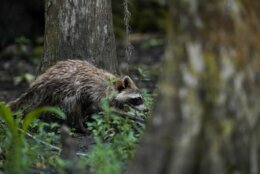 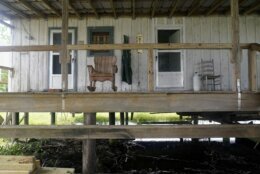 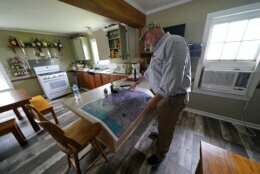 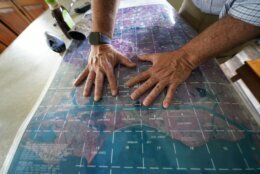 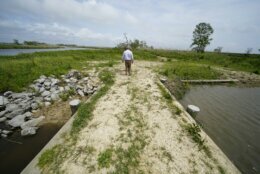 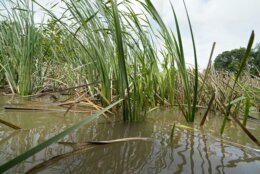 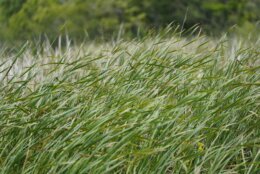 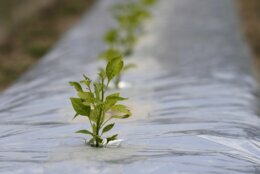 AVERY ISLAND, La. (AP) — As storms grow more violent and Louisiana loses more of its coast, the family that makes Tabasco Sauce is fighting erosion in the marshland that buffers its factory from hurricanes and floods.

Overall, the effort is probably a standoff, says CEO and president Harold “Took” Osborn, great-great-grandson of the McIlhenny Co.’s founder. But in a state that has lost 2,000 square miles (5,200 square kilometers) of its coast since 1932, holding your ground is a victory.

The company has been brewing Tabasco Sauce since 1868 on Avery Island — the tip of a miles-deep column of salt — and now fills up to 700,000 bottles a day, selling them in 195 countries and territories.

While sinking land is a problem throughout southern Louisiana, Avery Island and four smaller salt domes along the Gulf Coast are still slowly rising.

But the danger from hurricanes remains. A 20-foot (6.1-meter) high, $5 million earthen levee now encloses the 40 acres (16 hectares) or so around Tabasco’s factory because Hurricane Rita’s storm surge pushed floodwaters within inches (centimeters) of it in 2005.

Much of the wetlands work is low-tech, enlisting volunteers to plant marsh grass in the 30,000 acres (12,100 hectares) around the small island a bit north of Barataria Bay, one of the areas hit hardest by the 2010 Gulf of Mexico oil spill.

Osborn holds a master’s degree in environmental science from Oxford University, but one might say conservation is in his DNA. The company’s founder, Edmund McIlhenny, was a self-taught naturalist. Osborn’s great-grandfather, E.A. McIlhenny, created an egret rookery at the island in 1895 because the birds were nearing extermination by hunters who sold their plumage to adorn women’s hats.

In recent decades, McIlhenny Co. has armored shores against erosion with big rocks and has terraced wetlands to slow waves enough to let sediment drop out and form new land, Osborn said. “But the thing that works the best for the least amount of money is grass,” he added.

As he steers a company boat, Osborn, 58, points to an expanse of grass stretching deep into the marsh. Ten years ago it was open water — an oilfield canal that had widened over time.

Its mouth was plugged by planting clumps of smooth cordgrass a few feet apart wherever the bottom was a foot (30.5 centimeters) or less below the surface.

While the grass traps sediment, new shoots spring up from underground stems. “It catches good and it starts walking out,” Osborn said.

Grass also gets planted along other parts of the shoreline. At one spot, a few lines of grass run alongside the bank for about 20 or 30 yards (18 to 27 meters). One of last year’s hurricanes — either Laura or Delta — pulled out a wide swath of grass behind the scraggly row.

Osborn said the company also has plugged at least 15 of the many canals created by oil companies as shortcuts through the marsh. Oil companies that wanted to work in the area plugged some of them as part of their contracts, he said.

Marsh restoration around Avery Island has the added benefit of helping protect cities and towns to the north, said Mark Shirley of Louisiana Sea Grant. “Storm surge and hurricane protection is directly related to the marshland between you and the Gulf of Mexico,” he said.

After a decade or more of leading a summer 4-H class called Marsh Maneuvers, Shirley is intimately familiar with the planting process. In one day, a crew of 16 high-school students pulls up enough clumps of grass from a healthy area to fill two flatboats, then plants the grass along a shoreline or canal mouth.

“After a year or so, each small clump has multiplied 10 or 12 times and you have an acre or two of grass,” he said.

Multiply that by four classes each summer, plus other groups, and it adds up.

It takes about a decade for a canal to fill in completely, said Heath Romero, McIlhenny Co.’s land manager.

The family also played a big part in creating the Rainey Conservation Alliance to foster larger wetland restoration and coastal protection projects across 187,000 acres (75,700 hectares) in St. Mary, Iberia and Vermilion parishes. Neighboring private landowners and the Audubon Society are the group’s other members.

They have rounded up at least $80 million in grants — from $1.3 million in state surplus money for extending a shoreline protection project to $24.9 million for replacing more than 400 acres (162 hectares) of marsh killed by saltwater intrusion and restoring freshwater flow.

A demonstration project designed to protect 4,000 acres (1,600 hectares) created skinny terraced ridges 5 to 6 feet (1.5 to 1.8 meters) high — up to double the standard height. Some were planted with trees, others prepared as rookeries for seabirds and wading birds.

When Hurricane Barry hit three months after the project’s completion in 2019, the marsh behind the terraces was undamaged, according to a report commissioned by Audubon Louisiana, which owns some of the wetlands.

“Those (ridges) are expected to last between 50 and 100 years,” rather than 20 or so, said Erik Johnson, the state organization’s director of bird conservation.

The alliance is based on the idea that “what’s good for our neighborhood is good for me,” said John Foret, who worked with the group as a National Oceanic and Atmospheric Administration employee when it was formed in 2010 and became its executive director in October.

Osborn said there’s more to wetlands restoration than protecting a five-generation family business. “My family understands that the land has been very good to us and it’s our duty to honor, respect and preserve it,” he said.

Hedge fund may invest up to $400M in Lordstown Motors