Some Christmas lights worth driving extra for in Maryland

For most people, a few Christmas lights around the frame of the house and across some bushes are more than enough. Some people do more, though, and these people do a lot more.
Listen now to WTOP News WTOP.com | Alexa | Google Home | WTOP App | 103.5 FM

For most people, a few Christmas lights around the frame of the house and across some bushes are more than enough. Some people do more, though, and some people do a lot more.

In Bowie, Maryland, it’s a year-round obsession for a 19-year-old in his last year of college.

If you drive down Harness Way in Bowie, at the end of the cul-de-sac you’ll want to park your car (without blocking any driveways), turn off the headlights and crank up the car radio on 89.7 FM to experience the full show that Hunter Pugh designed.

“I have about 3,000 color-changing LE pixels” around the house, said Pugh, a double major in computer science and web and mobile programming at Liberty University. “It’s a whole computer-programmed show that’s programmed to music. It has some funny dialogue.”

It’s also very kid-friendly, featuring talking Christmas trees that banter on the front of his house.

“I started designing this show last December while the previous show was running,” said Pugh. “I ordered lights and built props all through the summer. In the fall months I started installing it.”

The lights blink in animated patterns with the beat of the music, which is broken up by “dad jokes” and puns that’ll keep your kids happy as they wait and wait for Santa’s big arrival. 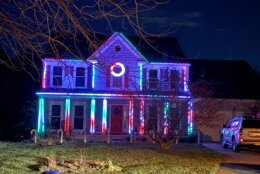 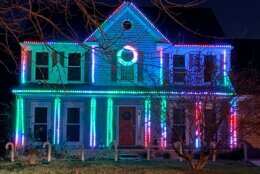 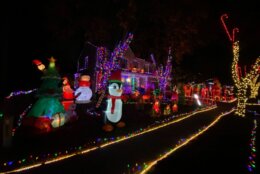 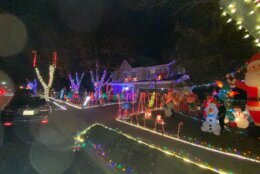 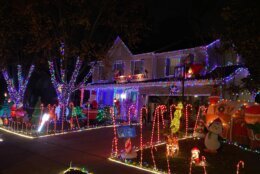 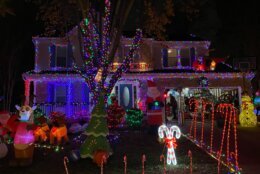 “A lot of this is DIY,” Pugh said. He admitted, “I always underestimate the effort that goes into it every year,” but he also loves going outside and talking to people who stop by to admire his performance.

“It’s such a blessing to see that I can bless others with this show,” he added. “I would love them to be here, everyone that can come. I would love to share the joy of Christmas with them.”

Only a few miles away, a whole neighborhood in Crofton gets into the act together.

Steve Williams, who lives near Urby Drive and Good Hope Drive, said it started 11 years ago when he moved into his house and realized he could probably climb out a bedroom window and put lights all around the front.

He added a little bit more each year, and “it’s contagious,” he said. “All of our neighbors, all to the left and all the way to the right, kind of joined in.”

The whole neighborhood, which sits just off Route 450/Defense Highway, shines brightly from the rooftops to the sidewalks. Inflatable decorations and trees and bushes encased by LED lights make it impossible to miss.

Williams even has Santa riding a helicopter on his roof — a decoration he’s had from the beginning.

For his house, he said, about 30 to 40 hours of planning and installing are needed to get everything up, starting around Thanksgiving. Asking him to count the number of lights set up around his yard is just as hard.

“I asked a little girl that had walked by a few days ago, ‘Do you think we have too many lights or not enough?,” he recounted. “Her answer was ‘Not enough,’ so we’ll stick with that.”

Visitors to the neighborhood are welcome to park and walk around seeing all the houses. One of his kids might even hand out a candy cane if you catch them at the right time.

“The joy that comes out of these kids and parents as they walk by is pretty cool,” Williams said. 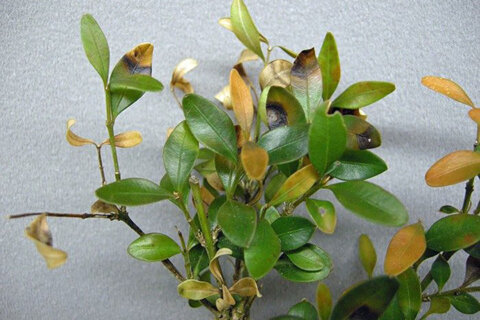 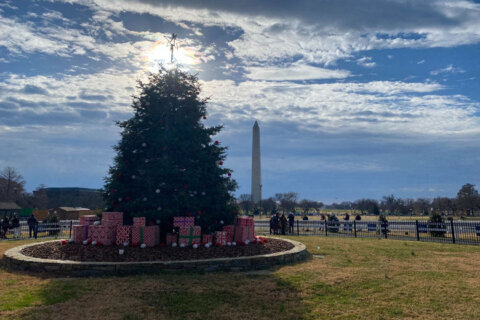 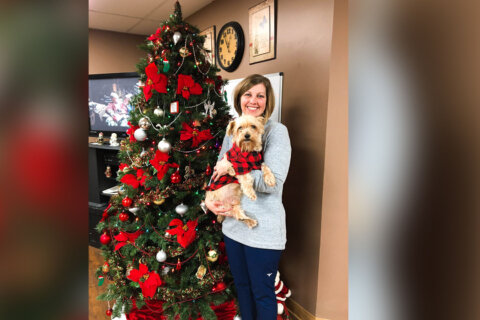